I like most foods, but radishes, rhubarb and chitlins are on my no-go list. But these impressions were formed at an early age and finding the right cook or the right circumstance could easily sway my perspective. A couple weeks ago I ate a foot-long white radish and thought perhaps I should reconsider my thoughts on radishes. The radish in question was a daikon radish (Raphanus sativus var. nigra or, some say, longipinnatus). 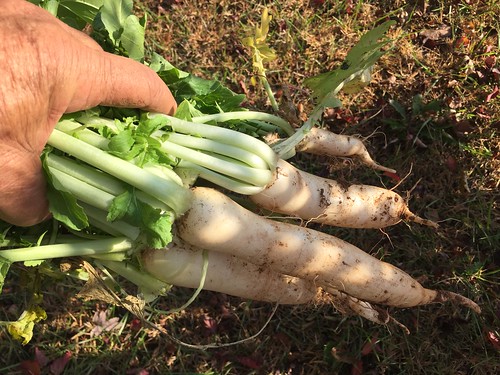 Radishes comprise a large group of annuals and biennials in the cabbage family that typically produce a storage taproot the first season and then flower, set seed and die early in the second season. The garden radish, the name itself taken from the Latin radix which means root, originated in Western Asia and the Eastern Mediterranean region. They have no exact counterpart in the wild and, in their many and varied forms, have been cultivated since the early years of agriculture.

The daikon radish is a fast-growing winter radish producing a foot-long cylindrical taproot that can reach an inch or two in diameter in sixty days. The top of these taproots often protrude from the soil two to four inches, topped with a foot-long crown of scalloped leaves.

The tangy, little red orbs we know as radishes today (one of the so-called summer radishes) are of relatively recent introduction, becoming popular during the 19th century in America. The cooking or winter radishes, with carrot shaped roots that can grow to 30 pounds in the right conditions, were the standard radish fare for several thousand years.

Radishes are believed to have made their way to China (and Japan) about 500 BC, where the long, white radish became an integral part of their cuisine. European explorers traveling to China in the 16th century reintroduced the white winter form back to their home ports and grew these “new” forms where they became moderately common. The long white radish from Japan, where it goes by the name of daikon radish, was observed by the American Perry Expedition in 1854. These white, deep rooted radishes never caught on in the United States but were sparingly used for oil seed production and as winter feed (the tops) for cattle.

Starting about 2000, researchers began studying daikon radishes for winter cover crops and alternative ways of managing soils for organic crop production. The results have mostly proven positive, showing that fall plantings of the radish help open compacted soil to air and water infiltration, can crack open soil afflicted with a hardpan layer, concentrate plant nutrients in the root zone for subsequent crops and prevent winter weeds. Newer, highly promoted clones selected specifically for soil improvement are available at high prices but are probably not greatly better at achieving these benefits than the long-rooted forms sold as vegetables.

The fast-growing crop is best planted six to eight weeks before the first anticipated frost date.  Seeds are broadcast at the rate of 10 pounds per acre. Germination is quick, happening in about four days.  Ideally, good stand establishment will result in more than five plants per square foot.  In two months, plants will have produced as much as 7000 pounds of biomass per acre and concentrated nitrogen, phosphorus and potassium in the root zone. The plants are top-hardy to 25⁰F and root-hardy to 20⁰F. By spring the tops and roots will have rotted away, sometimes producing a sulfurous smell during the process, leaving open cavities in the soil where the taproots grew. These provide portals for water and oxygen to infiltrate into the soil.   The many openings also allow the soil to warm faster, making earlier planting possible.

Winter weed control is strictly a competitive event. The fast-growing tops cover the soil with thick vegetation, excluding light needed for germination of the winter weeds. Then, when the tops die down after a hard freeze, it is too cold for the winter weeds to invade the space. There is no residual carry-over weed control for summer weeds.