Plant of the Week: Privet (Ligustrum) and Hedges

With well over 1,000 Plant of the Week columns under my belt, I often surprise myself when I realize there are some obvious omissions in the list. A couple months ago I happened upon a privet I was unfamiliar with, so when I went to file away the photos I discovered no mention of privets in these columns. 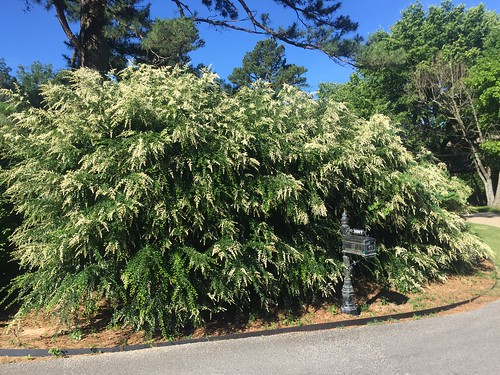 There are about 50 species of privets (Ligustrum) in the olive family that have been described with about 10 of these at one time offered for sale as garden plants here in the United States. The Latin name is an ancient name used by Pliney to describe these woody shrubs and trees. The common name privet is probably derived from the Latin word “privatus,” which means “not open to the public,” and is an allusion to their long use as hedge plants. The 12th century French word privy – which means private place – is from the same root.

Hedging for privacy, confinement (or exclusion) of livestock, or to make a visual statement by severely pruning shrubs in partier patterns is mostly a thing of the past. Today we use walls and fences for privacy and to keep out the deer. In an apparent deep-seated need for order and control, we satisfy this craving by shearing bushes in our foundation plantings into tight little balls and boxes.

In preface to his 1858 book on hedging, author A. O. Moore informs his readers, “the subject is one of immense importance to the future of the country.” Writing a decade before the invention of barbed wire, it probably seemed a critical issue on the vast expanses of unbroken prairie lands in the Midwest, but in a post barbed wire world, hedging became a landscape feature to define space and provide for screening unsightly views and assure privacy. Moore recommends privet hedges – to him that meant Ligustrum vulgare – for the refined residential garden.

Common privet was an early introduction into the United States, probably coming here with early English settlers in the 17th century. Plants were low branched and, if let unpruned, could reach more than 10 feet tall and wide, but annual pruning could keep them at more manageable sizes. Common privet was afflicted by a stem blight that would occasionally kill patches in the hedge – a disease known even in Moore’s day – and it lost most of its leaves in the winter. Even with these flaws, common privet remained the most popular large shrub for hedging until the early part of the 20th century.

By the outbreak of World War I, common privet lost favor and was replaced by California privet (L. ovalifolium), the privet we see growing in waste places and as a forest understory throughout Arkansas and the southeastern states. References cite this species as having been introduced from Japan in 1847, but it seems to have languished in obscurity until the 1880’s when an enthusiastic nursery promoter rebranded it as California privet. In 1900, Bailey calls it California privet in his Cyclopedia of American Horticulture and extensive recommendations are given on how to plant a privet hedge. By 1908, a writer in the gardening magazine Country Life in America recommended Regal privet for “people of refinement who are tired of seeing the California privet everywhere.”

The green leafed form of California privet is an invasive plant and should never be planted. Sure, if it is pruned severely each spring it will hardly ever flower, but maintaining the dedication to prune year in and year out for decades is unrealistic. It produces seed in such abundance and the birds distribute it so widely, it has become a major pest. A few years ago I did a bit of sample counting of a neighbor’s California privet hedge and estimated his 120 foot long planting had about 2.8 million black berries when they ripened in the fall.