Our knowledge of geography is too often informed by war.   We mostly remember the name Bosnia from the war that raged there from 1992-1995, but its capital Sarajevo was also the site of the assassination that lead to the start of World War I. Likewise, the Bosnian pine (Pinus heldreichii) shouldn’t be condemned for the wars that have raged around it for centuries — but sought out because it is a tough, beautiful tree.

Bosnian pine is native to higher elevations of southern Europe and found in Albania, Bulgaria, Greece, Montenegro, Serbia and Bosnia-Herzegovina – all countries that surround the Mediterranean and Adriatic Seas.  It typically grows at above 5,000 feet elevation but is used throughout the region as an ornamental. 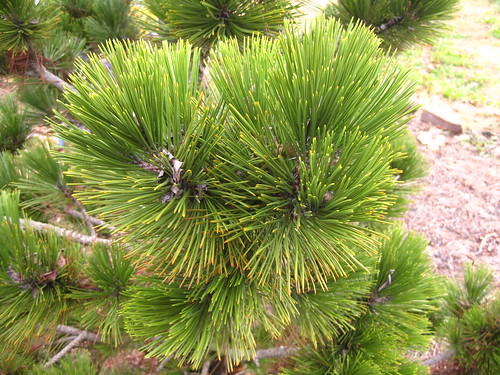 It is a two needle pine that at first glance resembles the strident Austrian pine (P. nigra), but it is slower growing than that species, has stiff, sharp-pointed needles only 2-3 inches long and a more compact, symmetrical form.  Needles persist on the tree for six years.

In nature Bosnian pines grow 60 feet tall, but in cultivation are typically half that.  Their spread is usually less than half their height with trees maintaining a tight pyramidal form, especially while young.  The cones, 4-5 inches long, are a yellow-brown when mature but purplish-blue when first formed in the spring.

The Bosnian pine is often listed as P. leucodermis, a reference to the whitish bark of older trees.  This name is now considered obsolete because P. heldreichii, named to honor a Greek botanist Theodor von Heldreich (1822–1902), was published first.  The species was discovered by separate botanists in different locations with descriptions unknowingly, separately published in 1863 and 1864.  It takes time for obsolete names to fade away.

Not surprisingly, seedling forms of Bosnian pine are not common in the nursery trade.  Instead a number of clones have been selected, perhaps the most common of which is Iseli’s “Emerald Arrow,” a slower growing incarnation with a tight pyramidal form.  I have watched a couple of trees for a decade, and have been impressed with its performance in a dry parking lot island bed.  It holds its color well in the winter and has put on 8-10 inches of growth each year.  We were forced to move one 8-foot-tall because of pending construction.  The root ball was shaky at best but after a year the tree is still flourishing, so I took this as a testament to its toughness.

Bosnian pine is ideal for use as a specimen or for screening.  It is hardy from zones 4 through 8 but is probably best situated in cooler locations if available, though my parking lot experiences casts doubt on this requirement.  It tolerates alkaline soil and seems to have good drought tolerance.

Diplodia blight is a serious needle disease of Austrian pines and many spruce.  Bosnian pine is said to be resistant to this malady, but because the disease does not usually appear on trees until they have attained mature stature, the jury is still out on this claim.

FAYETTEVILLE, Ark. –The hubbub about genetic engineering has died down a bit in the past few years as the two sides of the issue have mostly agreed to disagree.  In the two decades since the new technology was introduced, the major impact has been along economic lines, not biological.  As a biological template, genetic engineering is hardly new.  A look in the vegetable garden at the modern forms of the wild cabbage (Brassica oleracea) that grow there, points this out.

Collectively the descendents of the wild cabbage – originally native along coastal regions of southern Europe and the Mediterranean – are called “cole crops.” This is an Old English name for cabbage that was taken from the Latin word caulis which was what the Romans called the plant they introduced into Brittany during their occupation. Most of the modern variants of the wild cabbage were known to the Romans, indicating that the selection and transformation of this wild plant to the cultivated mainstays we recognize today happened several thousand years ago.

The cole crops consist of eight groups including cabbage, broccoli and cauliflower, mustard, kale, kohlrabi, and Brussels sprouts.  A more diverse group of plants arising from a single species is hard to fathom, yet through selection early farmers “engineered” the plants they grew into the diversity of forms now grown.

Kale, with its fleshy leaves held in an open cluster, was probably the first type of cole crop to be domesticated.  As a biennial, it produces an open whorl of leaves on a short stem during the cold weather and short day conditions of winter, only sending up an elongated flowering stem when spring arrives. Cabbage probably was the next step in the selection process when a farmer found a plant that held its wax coated leaves in a tight rosette, making it ideal for wintertime storage. Broccoli and cauliflower were selections made for their large fleshy edible flower heads.

Brussels sprouts are, in many ways, a throwback to the original wild form with its elongated stem. In Brussels sprouts, the stem may be 2 feet long, the dwarf type mostly grown today, to as much as 5 feet long with leaves produced up the stem and a topknot of fleshy leaves.  At each node, the juncture of the leaf and main stem, a bud forms and enlarges, much like a tiny cabbage head. These sprouts are usually 1 to 2 inches across.

Food historians disagree about the origins of Brussels sprouts.  One camp contends that a plant very similar to the modern day vegetable was known to classic Greek scholars, making it a probable candidate for early introduction into northern Europe during the period of Roman expansion.  Others contend it was not described until 1587 where it is mentioned in one of the early herbals. It was introduced to Louisiana by the French Acadians who were expelled from the Low Country of Eastern Canada in an early example of ethnic cleansing during the years between 1755 and 1763. Thomas Jefferson grew it at Monticello about 1800, probably from seed obtained from his European friends.

Brussels sprouts seem to be enjoying a comeback today as more health-conscious consumers look for variety in their diets.  They contain high amounts of vitamin A, C, folic acid and dietary fiber. And some research indicates they may help protect against colon cancer. Modern breeding techniques have succeeded in reducing the levels of a class of compounds called glucosinolates which are responsible for bitterness and are partly responsible for the increased popularity of the vegetable.

Brussels sprouts are a slow-growing cool weather vegetable that can be grown in any reasonably good garden soil. They can be grown as an early spring crop with plants set out in mid February with sprout production occurring during the early summer or as a fall crop with transplants going to the ground in late July and production occurring until the first hard freeze in early winter. In the southern half of Arkansas, plants will overwinter most years and continue producing throughout the coldest months.

Being a member of the cabbage clan, Brussels sprouts are afflicted by all manner of insects and diseases.  The most serious and common of these is the cabbage looper, which can do considerable damage to the foliage, but because the plants are so tough, there will usually be some yield.