A run through the produce section of the local grocery store lead to one of those impulse buys financial advisers advise us to avoid.  The purchase was a clamshell of bright, golden-yellow berries about an inch in diameter proclaiming themselves to be Golden Berries.  I don’t remember seeing them before and I’d never eaten one before, so why not?  Looking the plant up, I discovered it to be Physalis peruviana, a plant more commonly known as Cape Gooseberry or Inca Berry. 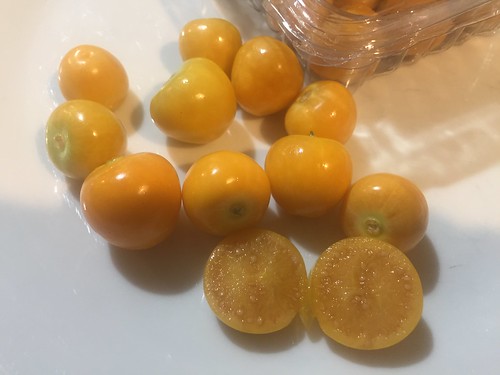 The Physalis, plants collectively known as the ground tomatoes, are a genus of about 75 species in the potato family that are distributed worldwide in the tropics but concentrated in the Americas.  Arkansas has about ten native species that are considered as weeds or wildflowers, depending on your perspective.  This species is native to the Andean highlands of Peru, Ecuador, Columbia, Chile and maybe Brazil, hence the name Inca Berry.

In its native range it grows as an herbaceous perennial, reaching three to six feet in height as a sprawling, soft-wooded plant with pubescent stems.  Plants have an indeterminate growth habit and continue to produce shoots, leaves, flowers and fruit continually as long as conditions are to their liking.

Softly pubescent, heart-shaped leaves are arranged alternately along the stems.  The solitary flowers have five fused, cream colored petals merging to form a drooping bell about an inch across and produced at each leaf node.  The inside of each blossom is marked with a broad, maroon, cog-shaped marking in the center of each flower.

As the fruit begins to develop the fused green calyx grows and encases the developing berry in a Chinese-lantern shaped husk that reaches about 1½ inch long at maturity when it turns the color of a paper bag.  Inside is a single shiny egg-shaped to round yellow berry reaching as much as one inch in diameter.  Cut in half the fleshy berry shows its kinship to the tomato.  Each berry contains from 150 to 300 tiny seeds.

The skin of the berries is naturally sticky due to the presence of a pair of high molecular weight withanolide glycosides (sugars) that are produced by glands at the base of the calyx.  This substance is thought to protect the developing fruit from predation.  The taste of the fruit is one of tangy sweetness with an undertone of some tropical fruit I can’t quite put a name to.  It is eaten fresh, in salads, mixed in chutneys, made into jelly or as an addition to fancy deserts.

The name Cape gooseberry, which the fruit resembles in a vague way, probably refers to the introduction of this fruit to South Africa in the first years of the 19th century as a possible cure for scurvy.  When the fruits are held in their husks, they can be stored for several months, making them effective for long sea voyages.  From South Africa, the plant was distributed to Australia, the Philippines and various Pacific islands.  Golden Berry is the name of a clone developed (or distributed) by England’s Long Ashton Research Station about 1980.

In 2009 Columbia was the main producer of Cape gooseberry in the world with 8000 metric tons produced on about 2500 acres.   Europe and Canada were the primary markets with the US importing about 2% of the total.  Cumbersome import restrictions and the fact the US market wants its berries de-husked accounted for some of the slower sales here.

Cape gooseberry can be grown as a summer annual in temperate gardens with transplants set out after the fear of frost is past.  They begin producing fruit in 70 to 80, with production ongoing through the summer as long as the plants remain growing.  They are winter hardy south of USDA zone 8 but will freeze back to the ground.

These plants should be given well drained sites with medium to poor fertility.  Making conditions too good for the plants by heavy fertilization or too much water will encourage vegetative growth and retard flowering.