As a rock gardener, you’ve got to love little plants. Especially, little plants that grow in hot, seemingly impossible sites. Rock Pink or fameflower (Phemeranthus calycinus) is a tough, but delicate Arkansas native that grows well in the rock garden and blooms throughout the summer. 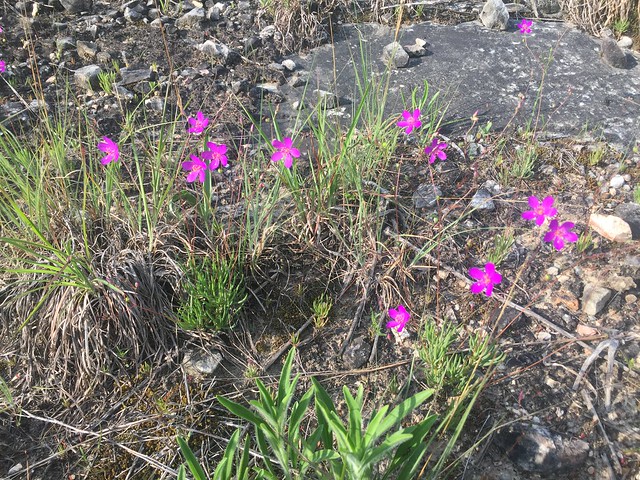 The fameflowers are a group of 25 or so (16 in North America) plants of the purslane family that grow in dry, rocky regions. Rock Pink, perhaps the largest flowered and showiest of the group, seems to radiate to the south and west from the Ozark region. The small flowered fameflower (P. parviflorus), also found in Arkansas, ranges from Minnesota to northern Mexico and east to Alabama.

Fameflower, as a proper member of the purslane family, is a small succulent perennial that produces short, erect stems growing to 3 inches tall. Succulent, wiener-shaped deciduous leaves to an inch long are produced up the stem. Plants are often found growing atop solid rock ledges where only a minimum terrace of soil has accumulated. I have found them on both sandstone and limestone outcrops in cedar glades.

In May, slender stems arise that reach eight inches tall and bear cup-shaped, wine or magenta colored, 5-petaled flowers to an inch across. The center of each flower is congested with a cluster of as many as 25 yellow stamens. In small flowered fameflower, the blooms are pink, to half an inch across and have fewer than eight stamens. Blooms of both species open in midafternoon to accommodate evening flying pollinators and wither away by sunset. Flowering continues throughout the summer, finally ending in September.

For most of the past two centuries, the fameflowers of North America have been assigned to the Old World genus Talinum, first used by Frederick Pursh in his 1814 The Plants of North America. That same year, C. S. Rafinesque, an eccentric polymath who studied botany, biology, linguistics, anthropology and other fields, proposed the genus “Phemeranthus” (ephemeral + flower) to describe the New World fameflowers. In the 1990’s, careful analytical examination of morphological traits and DNA analysis convinced modern botanists Rafinesque was correct and transferred all New World species to the genus Phemeranthus.

Fameflowers are easy to grow in a sunny, well drained and dry rock garden. Their foliage is diminutive in size, so it should be given its own space in the rock garden or planted amongst equally small plants. It selfseeds freely once established but never become pesky because it is so small and seemingly fragile. It is also available from some native plant specialists who have made selections of especially large flowered forms and sell cutting-propagated clones. It is winter hardy from zone 5 through 9.