My favorite president has always been Thomas Jefferson. Yes, I know he has lost some of his luster because he owned slaves, but I find his wide-ranging interest in architecture, science, literature and agriculture endlessly fascinating. I can also relate to him because he was a gardener – a note-taking gardener – and sometimes his notes are a bit cryptic just as mine are. 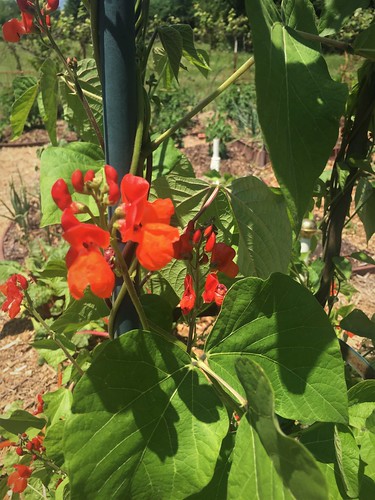 On Friday morning, April 17, 1812, Mr. Jefferson planted seeds of what he called white, scarlet, crimson and purple arbor beans (Phaseolus coccinea) along the long walk of his garden, possibly near the trees so the rank vines could use them for support. Later in the day the 69-year-old former president sat down and wrote his friend James Madison, discussing the wartime blockade that prevented Virginia farmers from selling their wheat, flour and tob (tobacco) on the world market.

Scarlet runner bean is one of about 70 species of Phaseolus found exclusively in the New World. Five of these species were domesticated in pre-Columbian times. Scarlet runner bean is native to the highlands of southern Mexico and Central America where it grows with a perennial, fleshy taproot and annual vines. In colder climes, it is grown as an annual where it produces fast growing vines that can reach twenty feet or more in length. The trifoliate leaves have 6-inch diameter leaflets that follow the sun during the day and fold at night.

The flowers, in trusses of 15-25 flowers, are typically bright red (most commonly grown) but white and purple forms are also available. The large, fleshy pods can be eaten when immature but oftentimes the pods are allowed to ripen and the dried beans harvested after the first light frost. The seeds are an inch long, usually black with purple markings, but white-seeded forms are also available.

We often forget that beans – both the common green bean, the white beans we use for bean soup and the black beans we have with our Mexican food – are New World crops that were developed by Native Americans long before Europeans reached the Americas. The scarlet runner bean made its way to Europe by the 1630’s by means of John Tradescant the Younger.

Though eaten in the green pod stage in Europe, the scarlet runner bean has, until recent times, been primarily promoted and used as an ornamental vine. Mr. Jefferson’s friend and garden mentor, Bernard McMahon (1775-1816), a Philadelphia nurseryman and the man to whom Jefferson sent Meriwether Lewis for a crash course in botany before departing on the famous expedition, surely provided the seeds. In his 1806 book, The American Gardener’s Calendar, McMahon says that scarlet runner bean was primarily used as an ornamental to cover trellises. In those pre-air conditioning days, fast growing vines to cover arbors and trellises were more important in the garden than today. Hummingbirds are especially attracted to the flowers.

Scarlet runner bean needs a large, fairly strong support for climbing. Native Americans planted the “three sisters” – corn, beans and squash – in clusters through their fields. The beans provided nitrogen for the corn and the cornstalks a makeshift trellis for the beans.

Plant scarlet runner bean seeds in mid spring before it gets too hot.  Plants should have at least six hours of sunlight and a reasonably productive garden soil.  Pods can be eaten fresh or dry seeds harvested in the fall.