Who doesn’t love a bargain? Earlier this week I walked into our favorite big box retailer and plunked down 20 bucks and walked away with two, just-arrived orchids in full bloom. They were Phalaenopsis orchids – commonly called moth orchids – and representative of the commoditization of what was once considered a rare and exotic beauty. Today, thanks to better understanding of production techniques and the power of mass marketing, they are another commodity that is available anywhere, anytime. 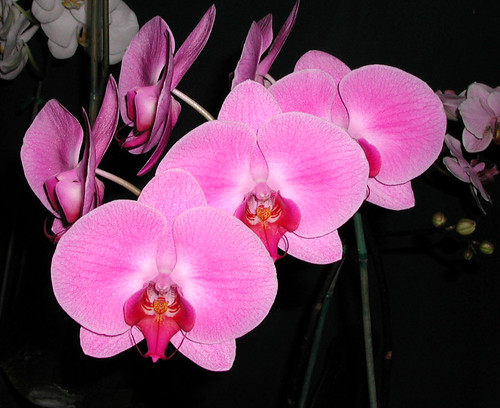 Orchids make up the largest family in the plant kingdom with over 25,000 species from throughout the world. The Phalaenopsis, with around 90 species recognized, are found in the Southern Pacific region from India to Australia with many of the species coming from the Philippines. The generic name translates from ancient Greece as “like a moth,” a good description for most of the modern hybrids.

Phalaenopsis orchids are epiphytic in nature and grow attached to the upper branches of tropical trees. They have 6-10 broad, leathery, two-ranked leaves that are typically 10 inches long and 2 inches wide and produced alternately up a compressed stem. Flower scapes are produced in a pocket at the base of the leaves throughout the year so long as conditions are favorable.

The nodding, often terminally branched floral scapes are to two feet in length and produce from 10 to 25 flowers over a 10-week blooming period. Individual flowers remain attractive for up to a couple weeks, making Phalaenopsis orchids the longest flowering of the floral pot crops. Flower colors range from shades of pink to white and even yellow but striped forms are also available. Orchids are a promiscuous group and many inter-generic hybrids have been created, leading to many variant forms.

During the age of exploration at the close of the 18th century and the first part of the 19th, a kind of “orchid fever” hit the plant collector community and saw some ugly things happen to procure these beautiful flowers. Beginning in the 1880’s the emphasis shifted from collecting orchids to hybridizing, and a cadre of dedicated orchid lovers developed a market for these rare, often temperamental beauties. Orchid enthusiasts have always been a fervent group, more interested in the minutia of the plants they love, than seeing them turn into a mass-produced commodity.

But innovations such as the development of vigorous triploid hybrid, tissue culture propagation and better understanding of the physiology of orchids over the past couple decades has lead to the ability to produce orchids that bloom on a timed schedule, making them ideal for mass market sales. Phalaenopsis orchids have proven the most successful of all orchid species in this regard, elevating the wholesale value of all orchids to second place in the greenhouse industry, behind only poinsettias.

Though the USDA does not collect data on which orchid species is being sold, industry estimates are that 85-90 percent of mainland U.S. sales are Phalaenopsis orchids. Which brings me back to looking for a bargain. More than 15 years ago, I started buying Phalaenopsis at the big box, home improvement stores where I paid about $25 bucks per plant. Now, they are half that. A study out of Hawaii found, not surprisingly, that price is the most important factor determining if consumers will make an impulse by and take home an orchid.

Part of the value proposition for Phalaenopsis orchids is that they are considered the easiest of all orchids to grow and they can be rebloomed.  Don’t be in a rush to shift a Phalaenopsis to a larger pot. Shifting up is only necessary every other year, and then be sure to use one of the commercially available orchid potting media. Indoors, I grow my orchids near a bright south facing window and maybe water them once a week. The experts recommend fertilizing weakly, weekly but my poor plants count themselves lucky if they get fed weakly on a monthly basis.

Once the flowers have withered away, the scapes can be cut half way back and they will often branch and produce another flush of flowers in about two months. After this second flush of blooms, I cut the scape back and move the plant outside on my shaded patio once the fear of frost is passed. Often, a new set of scapes will appear as fall approaches.