Growing up, we ate from our freezer or the vegetable garden. Being part of a large meat and potatoes kind of family, our range of vegetables was a bit limited. Parsley was not on the list. I probably met parsley (Petroselinum crispum) for the first time as a garnish on my baked potato at a steak house somewhere. I was not impressed at first meeting. 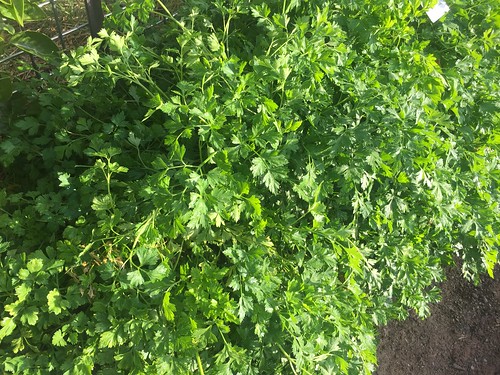 Parsley is a member of the carrot family and is one of two currently recognized species native to the Mediterranean region. It has been grown in Southern Europe for well over two thousand years, so pinning down its exact point of origin involves a bit of guesswork. It grows wild in the Mediterranean region but also England, where it was probably brought by the Romans.

Parsley is a biennial, growing in a leafy rosette the first year and bolting into flower the spring of the second year. Plants are winter hardy to zone 5 and overwinter throughout Arkansas but, unless plants are being saved for seeds, they are usually treated as an annual.

Two types of parsley are common, but three forms are available. All have three-times divided leaves with serrate edges. Leaves remain green until temperatures fall into the low 20’s⁰F. Greenish-yellow flowers are produced in flat heads in the spring on 2-3-foot-tall spikes.

The curly leafed form, P. c. var. crispum, is the most common. It grows about 10 inches tall and wide with new leaves produced from the center of the crown during most of the season. It has a milder flavor and is primarily used as an ornamental garnish. Variety neapolitanum, the flat-leafed or Italian form has a sharper flavor and is most commonly used in cooking. Variety tuberosum, the Hamburg parsley, appeared in the 17th century and is grown for a carrot-like white tuber that has not much caught on outside of Germany.

Archeological finds support the idea that parsley has been used by civilizations dating back to the beginnings of the Neolithic era, about 10,000 years ago. It was used medicinally in many societies and by the Egyptians and Greeks where it was associated with death and the afterlife. Both the curly and flat-leaf form were known to Theophrastus in the 3rd century BC. It was probably introduced to the English Isles during Roman occupation. It was an early import to the United States, showing up in catalogs by 1806, but probably here long before that.

Parsley was used in cookery during ancient times for it blends flavors and takes the sharp edge off of strong foods such as garlic. It retains its flavor after drying so is sold both fresh and dried. Seeds are also sold as an herb. It was believed by the Romans to reduce the effects of too much wine. It is sill listed as having many medicinal properties.

Parsley is usually started from transplants planted out around the time of the last freeze in the spring. It is best in a sunny or lightly shaded location with average soil and some summertime moisture. Leaves can be picked as needed during the growing season. It can also be grown as a container plant during the summer but be sure to keep it well watered. Plants can be dug and moved indoors for use as a wintertime pot-herb, with fresh sprigs produced through the winter.

Seed germination in parsley tends to be slow and sporadic. Seedlings ready to transplant can be produced in six to eight weeks. For gardeners into butterflies, parsley is one of the principle foods for the black swallowtail.