Plant of the Week: Penstemon Pollinators

Love of nature is nothing new. Most of us are bitten by the nature bug while children, and many never recover, while others shrug it off and go through life as uninterested bystanders to the mysteries of the natural world. Gardening is a refuge for nature lovers who focus their attention on their own little plot of earth. Being nature lovers and romantics, it should not be surprising that of late gardeners have turned their attention towards the birds and bees. 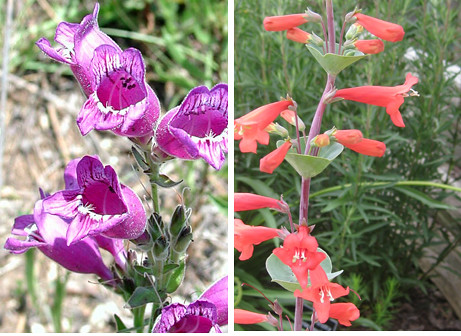 Well, not just the birds and bees, but pollinators in general. Butterflies led the way as gardeners changed their way of thinking and envisioned their little corner of the world as not only a personal refuge, but as a safe harbor for other creatures. Today, garden conferences usually have more talks on pollinators than plants, a trend I’ve been slow to embrace. Following this trend, lets consider the birds and the bees as we explore coevolution.

Coevolution is the process whereby two species reciprocally affect the other’s evolution. Consider chihuahuas. While it is well known dogs evolved from wolves, it is hard to envision how or why a chihuahua would ever dogpaddle out of the wolf gene pool. Dogs, in their many and varied forms, coevolved with humans and apparently some people like little yappy dogs.

I’m a member of the American Penstemon Society, a group of 450 or so like-minded nature lovers who get their kicks tromping through the western states looking for each and every one of the 250 or so species of penstemons. Penstemon is a New World species, first appearing after the super-continental breakup that isolated us from Europe and Asia. Likewise, it hasn’t spread into the moist tropics because it mostly grows in drier, temperate regions.

In the plant world, orchids are the poster child for coevolution because their many diverse forms are often associated with a specific pollinator. Darwin, after his foundational book Origin of Species was released here in 1859, went on to study orchid pollination and fleshed out many of the concepts of coevolution, though the term itself was not in common usage until the 1960’s. Arkansas too has penstemons, and it is apparent that coevolution has helped shape the appearance of many of our native wildflowers, including penstemons.

Arkansas is home to about 10 species of penstemons, including the prairie penstemon (P. cobaea) and the scarlet penstemon (P. murrayanus). Cobaea is mainly a species found in the Great Plains from southern Nebraska to Texas but it also occurs on limestone outcrops in the Ozarks and on old reefs of shells in a couple of our southwestern counties. Scarlet penstemon is mainly a north Texas species that slips into the state in a few southwestern counties.

The large inflated flower of cobaea gives a good hint as to the preferred pollinator for this species, a big old fat bumble bee. The tubular flower and red color again hints to its major pollinator for scarlet penstemon, the ruby throated hummingbird.  The mutualism between plant and pollinator is nectar for the pollinator and cross pollination services for the plant. In penstemons, theirs is a facultative mutualism, where other pollinators – such as a moth or a honeybee – could do the job and get the reward, but the plants are best adapted to their specific pollinators.

Both of these penstemons are good garden plants and offered in the garden trade. Of the two, cobaea is a bit trickier to grow and seldom lives more than a couple years whereas the scarlet penstemon can be longer lived. Both should have alkaline, well-drained soil in full sun. The best garden performance I’ve seen for penstemons is sandy soil, but not many of us have that available.