Twenty years ago, grasses were hot. The new American garden movement – pioneered and promoted by landscape architects James Van Sweden and Wolfgang Oehme – was rewriting the rules of high-end garden design, a style that relied heavily on big, bold perennials, especially grasses. Prairie grasses such as switchgrass (Panicum virgatum) could be found at every nursery and big box store. 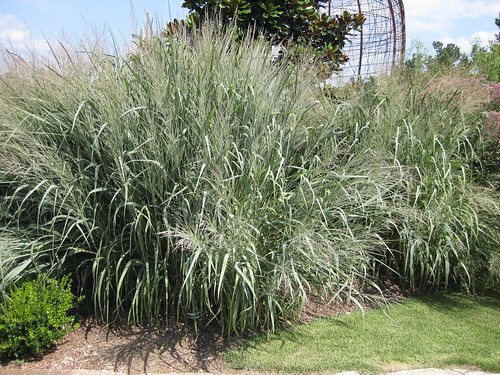 Switchgrass is a member of the mighty grass family that contains more than 12,000 species. The Panicum genus contains more than 450 species widely dispersed throughout the tropical world with a few, such as switchgrass, extending north from Mexico into the prairies of the United States and Canada almost everywhere east of the Rockies.

Over its wide range, switchgrass is a variable plant. In colder areas or in higher elevations, it tends to be shorter and have a more turf-like growth habit, spreading by underground rhizomes. However, most of us know it as a strong clumping grass growing to head height with broad, bold leaves. The size of the clump spreads slowly over time. Ten-year-old plants in tight, clayey soils here in Fayetteville have a base spread of three feet but a mushrooming top spread of more than twice that.

Growth begins with the first warm days of spring from the ground with the densely packed stems attaining a height of four feet by midsummer. Leaf blades are a foot long and an inch wide, with a bright green to gray-green color. In the fall, yellow to even reddish shading may be seen before the tan color of winter arrives.

The large panicles appear at the ends of stems in late summer and early fall and are held above the foliage, reaching about six feet in height. The feathery, elongated and open panicles may be as much as 18 inches long and 10 inches across. They remain intact through the winter and provide a part of the bold wintertime form of the grass.

“Dallas Blue” (pp 11,202), the most common switchgrass in the nursery trade and known for its robust growth and blue-tinted foliage, was introduced by Columbus, Ohio nursery owners Ken and Linda Smith, who received their patent in 2000. The original plant was collected from a batch of seedlings in 1994 in Dallas, Texas and was presumed to be a hybrid of uncertain parentage.

Most of us probably remember switchgrass, not from its place in the garden, but from the pre-fracking days of George W. Bush’s administration. In 2006 he touted the possibility of converting switchgrass biomass into ethanol and backed the proposal with research dollars, of which more than $100 million have been invested to date.

Given the congressional mandate that 10 percent of our fuel should contain ethanol, it sounded like a good idea because marginal farmland could be planted with the perennial switchgrass and a sustainable yield of biomass produced annually. Unfortunately, as bootleggers proved long ago, it is easier to make alcohol from corn than from the cellulose of switchgrass. From a sustainability standpoint, switchgrass biofuel seems like the way to go but the cost of commercializing the concept and the uncertainty of a whole range of energy related issues has put the movement on hold.

Switchgrass is a natural for inclusion in any kind of prairie restoration project or in the larger landscape where it can be planted in large, bold drifts. If used as a part of the perennial border, it should be treated as a large shrub and planted at the back of the bed where it has room to flop about.

The garden forms of this big grass are hardy from zones 5-9. Plants are best in full sun but will tolerate light shade, though their inherent late-season floppiness, will be magnified. They grow in a wide array of soil types and will tolerate considerable drought once established. At the Botanical Garden of the Ozarks, they have naturalized in our storm water retention pond, tolerating periodic flooding with no apparent harm. Propagation is by division, with an axe a better tool than a shovel.