Plant of the Week: Pachypodium

I collect things.  I can’t help it.  I don’t understand people who have tidy, uncluttered lives.  My interests are a bit eclectic; pocket sized rocks from everyplace I visit to books to various kinds of plants.  Succulents in general and Pachypodiums in particular comprised a significant collection that all perished last week when the pilot light went out on the heater for my little hobby greenhouse when the temperature dropped to 5⁰F. 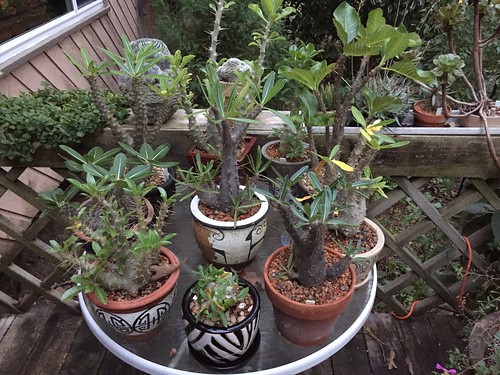 Pachypodium is a genus of 21 species of plants in the dogbane family from Madagascar and adjacent areas of South Africa.  I’d accumulated my collection over the last decade from a guy I know who knows a guy who collected seeds in Madagascar.  I’d accumulated almost all of the sixteen species native to that island nation.

Pachypodiums, which have no real common name, are spiny succulents with thickened trunks (see caudiciform plants in the Plant of the Week archives) that store water during periods of drought.  The name is derived from Greek (pachus) for stout or thickened plus Latin (podion) foot.  Pachyderms, an obsolete term that ranked elephants, rhinoceros and hippopotamus together, means thick skinned.

Some of these species grow as exclamation-point-shaped bottle trees in the wild while most are shrubby in form with swollen bases and regular branching, at least while young.  But all make excellent little pot plants if root growth is restricted.  The quarter inch to inch long spines are borne in pairs (mostly) at the node where leaves formed.  They spiral around the stem in rows.

Pachypodes have simple, elliptical leaves with a prominent midrib that range from three to six inches in length.  The fallen leaves are unusual in that they have almost no fiber content, crumbling into pieces when you pick one up.  Pachypodium lamerei and P. geayi, perhaps the most common bottle-tree species, are both evergreen unless drought stressed.  Most of the other species I grew dropped their leaves as the days got shorter in the fall.

Flowers are pastel in shades of red, yellow, pink and white, depending on the species.  The flowers are produced from a terminal scape in the spring and are funnel shaped with five well defined petals.  Most of my plants were about fifteen years old from seed and only one had flowered before their untimely death.

My curiosity about Pachypodiums began during the 1980’s when I first encountered P. lamerei in an offering of houseplants.  I didn’t know the plant and found almost nothing about it in my reference books, so my curiosity was spurred to learn more.   As they say, the rest is history.

Pachypodiums grow in isolated pockets in Madagascar and over-collecting has threatened the species in the wild.  Seeds are available of several species from field grown plants in southern California.  Only seed grown plants are worth growing because cuttings made from the slender, elongated branches never form the caudiform base that is the most interesting feature of the plants to most succulent growers.

For me Pachypodiums made excellent pet plants because they adapted well to five and six-inch size pots, they grew slowly and they took little attention.  In the summer I moved them outside and let natural rainfall do the watering.  In the winter I essentially ignored them, watering perhaps once a month.  Fertilization was minimal because too much nutrition causes the plants to stretch out, destroying their compact nature.