Plant of the Week: Ozark Superbloom

The desert southwest has had two wildflower superbloom events in the past three years. This year, at least in the Ozark region of the state, we are having our own version of a superbloom. Having called the state my home for almost fifty years, this is the best midseason bloom display I’ve ever seen. 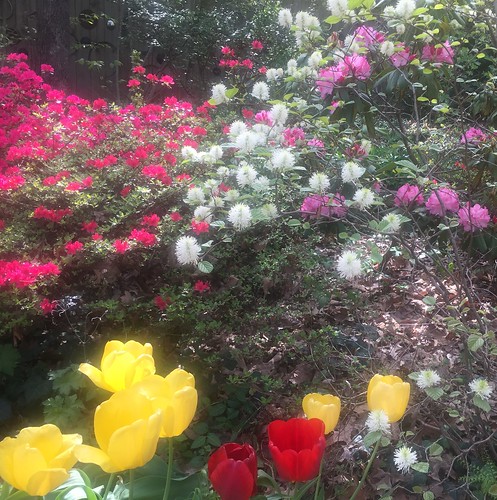 Just returned from a tour of the Buffalo River valley and parts of the northern Ozarks, I have seen more dogwoods, redbuds and flowering plums blooming at the same time than I ever recall. This abundance of bloom and synchronicity of flowering is a reflection of weather events over the past year. I make these comments with some apprehension, for I know that weather varies dramatically across the state, but at least here in northwest Arkansas it has been a spectacular midseason bloom display.

Weather conditions during the 2018 season shaped the number of flower buds formed during July and August of that year. The 2018 season started off with two late season freezes that killed flower buds on all of my early and midseason azaleas and many other trees and shrubs that bloom during the mid-March to early-April period. With no flowers, there was no seed production so the plants spent energy reserves making vegetative growth.

The summer rainfall patterns for 2018 were favorable during most of the year to keep the plants growing, but not excessively so. Normally we have our driest weather during late July and August, but in 2018 we had good rains until mid-August when the dry conditions finally arrived. Dry weather and the shortening of the day length period triggers flower bud production so the spring bloomers responded by setting a plentiful supply of flower buds.

The winter of 2018 and 2019 was very mild and moist with many parts of the state asking the question “what winter?” By the last week of February it looked like winter was trying to surrender for the season when, on March 4-5, the temperature dropped to 7⁰F, the coldest temperature of the winter. This seasonable, but unfortunate freeze, killed many of the open flowers and swelling flower buds on the early season bloomers. In my yard, my early blooming Korean apricot and one especially early magnolia shriveled up and died. The low temperatures injured flower bud tissue in many early blooming plants, so many deciduous magnolias and other early blooming plants only had a lackluster display this year.

But this late season freeze accomplished one other thing, it caused a synchronicity of bloom, overlapping some earlier-to-bloom plants with the midseason plants. Typically, there is a predictable sequence of blooms with flowers appearing in succession, one after the other. Redbuds typically bloom about a week or ten days before dogwoods, but the early March freeze slowed the development of flowers in redbuds but did not affect flower bud development in dogwoods, which bloomed at the normal time. In my azalea garden I saw a similar affect. Early season azaleas such as “Festive” bloomed late and are in full flower with the midseason variety.

The late freeze will also affect the late spring display for gardeners with a lot of the spring blooming hydrangeas. These big blue flowered beauties begin flower development in late winter, and here in north Arkansas, seldom escape a killing freeze in March. This year freezing temperatures in early March spread further south in the state, so many hydrangeas in the central part of the state probably had some of their flower buds killed.

While the early bloomers and some of the late bloomers may have a somewhat tarnished display, the midseason display has been one for the record books.