A walk in the woods in the fall is a wonderous thing that lifts the spirits and refreshes the soul. After one of my annual pilgrimages to King’s River Waterfall in Madison County last week, I renewed my acquaintance with a couple silvan friends – the hop hornbeam (Ostrya virginiana) and the musclewood (Carpinus virginiana). Because their leaves look a lot alike, because both grow as small woodland understory trees and they share a common name – ironwood – they often get muddled in my brain, even though they are quite distinct. 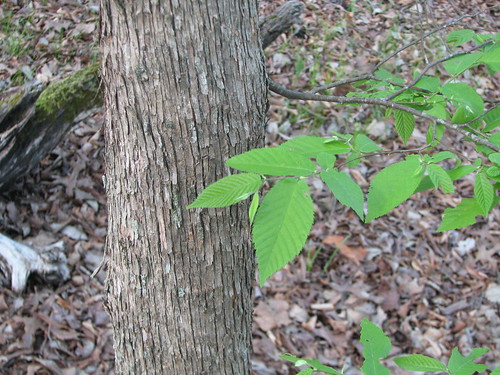 The hop hornbeam is one of eight species belonging to the birch family that are widely scattered across the northern hemisphere. Three species occur in North America. The hop hornbeam is the most common of these with distribution throughout the eastern woodlands from southern Canada to east Texas and all of Arkansas.

It grows as a single-trunked, smallish, round-headed understory tree seldom exceeding 25 or 30 feet in height or width. Trees have a distinctive, gray-black ribbony bark that easily separates it from the other ironwood (Carpinus), that has a smooth, muscular bark. The deciduous ovate leaves are alternate on the branch, thin textured, two to five inches long, and marked with numerous fine serrations on the margin of the blade. Leaves closely resemble those of Carpinus.

The flowers of hop hornbeam consist of three or so brownish, caterpillar sized male catkins at the ends of branches and inconspicuous female flowers that are produced lower down on the stem. The catkins appear in the fall while the female cones don’t show up until spring. Later in the season the female flowers mature into small nutlets (seeds) surrounded by green inflated bracts that turn paper bag brown as the season progresses. The cluster of inflated bracts are to 2 inches long and closely resembles the hops harvested to flavor beer during brewing. In Carpinus, the nutlets are attached to a flattened, three-lobed leaf-like bract.

Habitat preference is another distinguishing characteristic between hop hornbeam and musclewood. Hop hornbeam prefers a slightly drier, more upland habitat away from streams where musclewood is usually found in flood plains, often growing right up to the edge of the creek.

Of the two species, hop hornbeam is the more anonymous of the pair. Because hop hornbeam grows only as widely scattered trees and without the smooth, distinctive bark of Carpinus, hop hornbeam blends into the background of the forest understory. It is probably a little easier to spot in the winter after leaf fall when the catkins and brownish clusters of hop-like fruit clusters stand out better.

The name hornbeam is an old English name for both of these trees because the wood of both was used interchangeably to make yokes for oxen. The wood is heavy, hard to work and very strong, but has very poor decay resistance. It has no commercial importance in the timber industry today but has been used as spokes for wagon wheels, tongues for wagons and farm implements and as heads for wooden mallets.

Hop hornbeam is not a part of the traditional nursery trade though it is offered by a few firms specializing in native plants. It will grow in full sun as well as shade. As a young tree it is more pyramidal in form with its round-headed form more pronounced as it ages. Trees are slow to establish after transplanting and somewhat slow growing.