One of my first garden loves was bulbs, but they drift in and out of my mind as I’m easily distracted by other beauties of the natural world. Last summer I happened upon a clump of flowering bulbs I knew, but it took a couple months before the name came to me. I finally remembered it as Galtonia, but when I went to look it up, I discovered the name of summer hyacinth had been changed to Ornithogalum candicans. 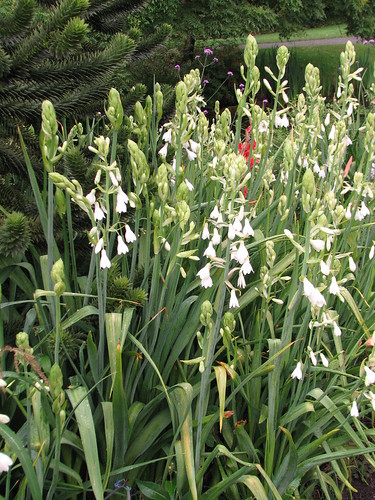 Reclassifying these South African bulbs to the star-of-Bethlehem genus Ornithogalum is a new suggestion, being proposed in 2004. Like all proposed name changes, it comes with a lot of argument amongst the professional taxonomists and slow, begrudging acceptance amongst bulb merchants and gardeners. If the name change sticks, the newly lumped star-of-Bethlehem genus will have about 150 species, all belonging to the hyacinth family.

This bulbous plant produces long, basal, sword shaped gray-green leaves that are up to three feet long. In midsummer it sends up unbranched flowering stems 2-4 feet long that bear 30 or more pendant white flowers held out from the stem on two-inch-long peduncles. The flowers open from the base, with youngest flowers at the apex of the shoot. Individual flowers are to an inch and a half long and highly fragrant. The outside throat of the flower may be tinged with green.

This species is native to the southeastern part of Africa where it grows in high elevation grasslands between 4000 and 7000 feet. The region it occupies on the continent is summer wet and winter dry, so it is well adapted to most parts of the eastern United States south of zone 6, provided it has reasonably good wintertime drainage.

This species was first grown in the northern hemisphere in 1862, when an English traveler named Thomas Cooper collected bulbs in a mountain pass bordering Natal and the Orange Free State (now Free State). In 1870 it was incorrectly identified as a kind of hyacinth; by 1880 a French botanist renamed it Galtonia, after Sir Francis Galton (1822 -1911), an Englishman who had traveled in the region and wrote a book.

Galton was a Victorian polymath who had a hand in shaping many aspects of modern life. Today we would consider him a statistician as he attempted to apply mathematical logic to everything from human genetics to the weather. He coined both the word “eugenics” and the phrase “nature versus nurture” as he attempted to mathematically quantify intelligence, personalities, the effect of prayer on recovery from illness (he found no correlation), and other hotly debated social topics of his day.

In the field of forensic sciences, he was the first to quantify using fingerprints in criminal investigation and develop a workable system for cataloging and comparing prints. In meteorology, he developed the first weather map for Europe, developed the theory of anticyclones (high pressure systems) and established the first system for collecting short-term climatic data across Europe.

Summer hyacinths bloom in late summer with clumps remaining in bloom for four to six weeks, making them ideal for inclusion in the mixed border. They are best in full sun in highly organic, friable soils that are kept moist in the growing season and assured good drainage during the winter. They spread freely but do not require frequent division. Division after five years may be beneficial with this best done in early spring. Bulb merchants typically market summer hyacinth with the summer bulbs in catalogs that arrive in midwinter.