Plant people are a unique subset of the human race. I count myself amongst their ranks but mostly as a sideline observer, not a seeker of the new and novel. After a decade of watching it grow in other gardens, I’ve finally gotten a copy of Amethyst Falls Oregano (probably a selection of Origanum libanoticum) and decided to learn more about it. 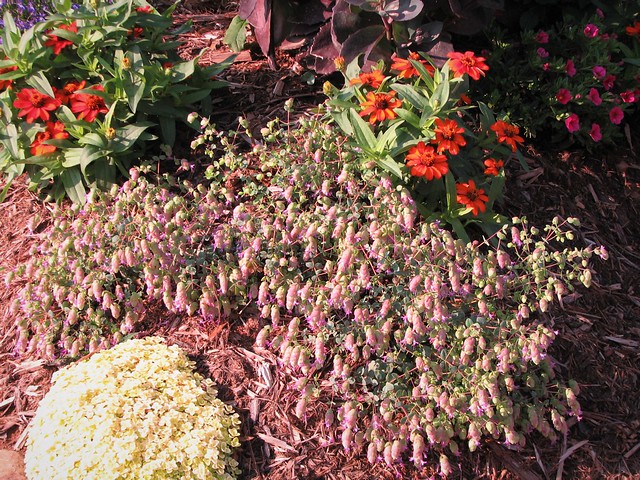 The Origanum genus is a grouping of 40 or so aromatic perennial herbs in the mint family that are native to the mountains of southern Europe and Central Asia. The spices oregano (O. vulgare) and marjoram (O. majorana) are the most important plants in the group, but several species are grown in regions with milder climates as ornamentals. The hopflowered oregano is both attractive and able to survive some pretty cold weather.

O. libanoticum is described as being from Lebanon and the mountains of Syria, but there seems to be some confusion about the exact origins of the plants in cultivation under that name. It is a sprawling herbaceous perennial with a woody base that grows about a foot tall and spreads to 18 inches or more across. It has rounded, thumbnail sized fragrant leaves arranged along slender, brownish stems that branch at the ends and produce unusual floral bracts.

The flowers are tubular, light purple in color with three separated lobes above and two lower petals partially fused. Though the flowers are attractive and produced over much of the summer and into the fall, it is the worm-like arrangement of tightly packed pinkish to coral colored bracts that provide the most impact for this trailing plant. These finger sized bracts cascade down and form a long lasting display during the growing season. If collected and dried, they can be taken indoors for dried flower arrangements.

Amethyst Falls oregano was a 2007 introduction by Bluebird Nursery in Clarkson, Nebraska. The uninitiated might think the northeastern corner of Nebraska to be an unusual place for a new plant introductions for American gardens, but it is one of more than 40 new plants introduced by its owner, plantsman Harlan Hamernik. Hamernik was a plant collector who traveled the world looking for new and interesting plants. He said that if a plant could live in the harsh climate of his region, it would probably do fine in more hospitable climates.

Where the seed for Amethyst Falls came from is not clear. The species has been grown along the West Coast from British Columbia to Southern California for decades but memory of how it got there is lost. In 1980 the California Horticulture Society selected the plant for an Award of Merit. Likely Hamernik planted some seed picked up on his travels, nurtured the seedlings and selected from the survivors a few years later the one that performed the best in his test garden. His nursery was in the thick of the new plant craze a couple decades ago, with 440 new plants added to the pages of their catalog between 1999 and 2001.

Amethyst Falls oregano is a low growing plant suited for use in the sunny rock garden or for edging. It has great drought tolerance but needs sharp drainage, especially in the winter months. Because of its requirement for good drainage and pendant form, it can be especially effective when planted at the top of a low wall.