I guess yellow is my favorite color, at least in flowers, so it is not surprising that everywhere I look this spring I’m seeing shades of yellow. Perhaps the brightest of these yellow flowers is the Missouri primrose (Oenothera macrocarpa). 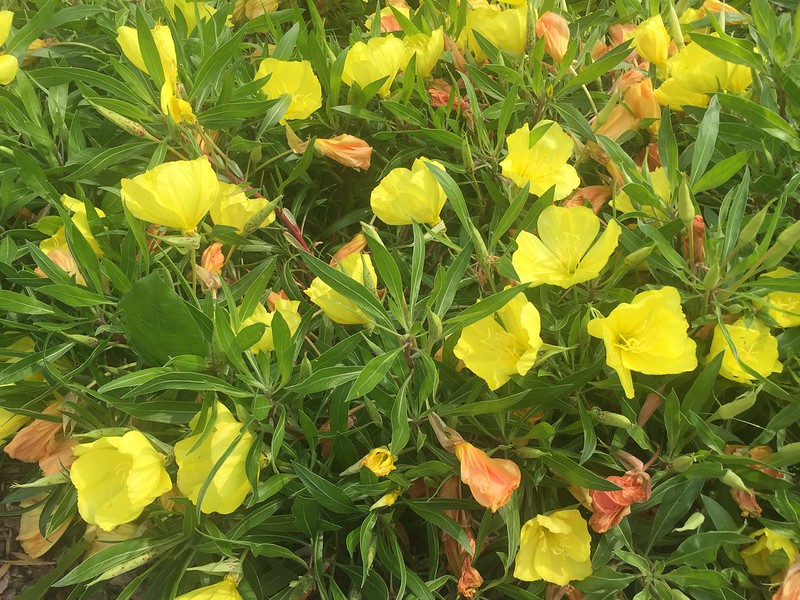 The approximately 140 evening primroses – also known as sundrops – belong to the Onagraceae family and are all New World species that have become widely naturalized around the planet. Europe alone is said to have more than 80 species that have been introduced in the past 500 years. As a genus, it probably originated in Mexico and has spread north into the United States and south into South America. Evening primroses are early colonizers of disturbed sites, but most do not persist long if competition with other species is keen. They are not at all closely related to true primroses.

Missouri primrose is native to the Ozark dome and the southern Great Plains from Kansas to Texas. In Arkansas it is found in the northern tier of counties in the Ozarks. It is typically found on limestone soils, dry forest glades, or rocky bluffs with good drainage and full sun exposure.

This evening primrose is an herbaceous perennial that has a stout, fleshy root system that can persist for many years. It has a sprawling habit and grows to 10 inches tall with a spread of about 2 feet. It has narrow, gray-green leaves to 4 inches long. The large, floppy, four-petaled bright yellow flowers are slightly fragrant, upward facing and to 4 inches across. Individual flowers persist but one day, opening in the evening and withering with the heat of the day.

Oenotheras are an odd group of plants in one way; they don’t always adhere to the typical rules of Mendelian inheritance. And they are a promiscuous group of plants, with most species cross-fertile with other species of the genus. Because of this, a German botanist named Hugo de Vries (1848 – 1935), used Oenothera to develop his elaborate – but ultimately wrong – mutation theory of evolutionary biology.

De Vries was one of three co-discovers of Gregor Mendel’s paper on pea breeding that became the basis for understanding inheritance of traits. De Vries postulated that traits were transmitted to offspring by “pangenes” (20 years later shortened to “genes”) and that sudden changes could occur as a “mutation” in the pangenes. While the scientific world eventually considered his “mutation theory” bogus, popular culture embraced it and about every superhero on the movie screen today expounds on this misguided theory of evolution.

Missouri primrose is remarkably well suited for use in the garden and adaptable to a wide array of soil types. It is drought tolerant and does not need summertime watering once established. It is best used in rock gardens or in stand-alone beds where the bright flowers will be produced from early May into mid-June. Missouri primrose does not compete well with taller perennials or in a prairie habitat amongst tall grasses. Heavy, winter-wet soils can cause the root system to rot away.