Gardens celebrate diversity and inclusion. Mostly we like plants that are attractive, reliable and pique our interest and are willing to ignore where they come from and preconceived notions of what we think they are supposed to look like. A plant such as yellow grape hyacinth (Muscari macrocarpum) is completely outside our notion of what a proper grape hyacinth should be. 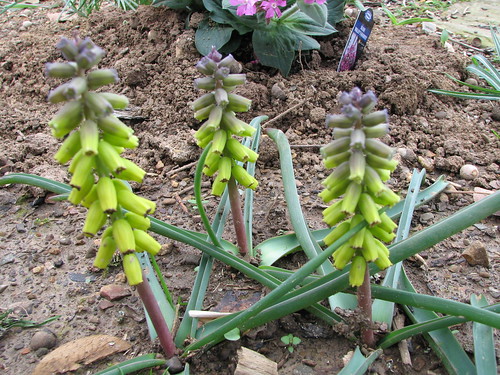 Forty-two species of Muscari are described in the asparagus family. The species radiate into southern Europe and Central Asia from the Mediterranean basin where they typically occupy dry, rock areas. The yellow grape hyacinth is native to Crete and southern Turkey.

The yellow grape hyacinth is a bulbous plant with bulbs that are to an inch and a quarter across. When established in a site they form fleshy basal roots that make establishment and subsequent relocation of bulbs more difficult than most Muscari. Half-inch-wide green leaves appear in the spring that are much broader and lack the twisting and twirling of the common grape hyacinth (M. armeniacum) which often sends up its foliage in early winter. The foliage dies away by early summer.

Six-inch-long spikes containing half inch long, fragrant, slender tubular flowers appear in mid spring from the bulbs. At first the flowers are a kind of gray-purple color, but as they mature and enlarge in size, turn to a clear yellow.

The purple grape hyacinths have been cultivated in European gardens since the end of the 16th century, having been brought from Turkey by Carlos Clusius (1526 – 1609), the botanist responsible for introducing Europeans to tulips and the potato. The yellow grape hyacinth was known to botanists in the 19th century but probably not much grown in European gardens until the middle of the 20th century. The species received an Award of Garden Merit from the English Royal Horticultural Society in 1948.

The yellow grape hyacinth made a reappearance in American gardens in 2003 when a Dutch bulb grower introduced a selection called “Golden Fragrance,” which they first put into production in 1999. This plant had been selected by a gardener named Ethel Savory.

Yellow grape hyacinth is hardy from zones 6-9, and can be grown in most well drained garden soils. It is slow growing so escape should not be a problem with this species. Bulbs should be planted 4 inches deep and 4 inches apart. Because it is still expensive and somewhat of a rarity, it is best used in rock gardens or for forcing in indoor pots.