Plant of the Week: Miltoniopsis; Pansy Faced Orchid — May 5, 2017
skip to main content

I like to think of myself as frugal, not cheap. Appreciating the beauty of flowers and realizing the inherent rewards of bringing some home for the wife, I do so with spastic irregularity. But cut flower bouquets just don’t last long. A week at most, and they gotta go. Orchids have risen to the top of my favorite flower list because they last – six to eight weeks is not unusual – and are they ever beautiful. Even if they only bloom once and are discarded, they still provide great value. The pansy faced orchids (Miltoniopsis hybrids) are a great choice for the spring. 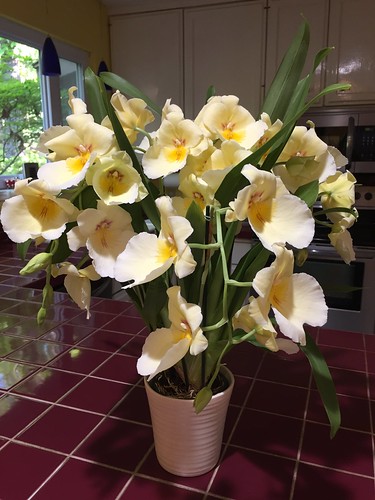 The pansy faced orchids are based on a group of six epiphytic species found in the mountains of Brazil, Venezuela, Ecuador, Columbia, Peru and southern Central America where they occur mostly at 2,000-6,000 feet elevation range. They grow in the upper branches of the forest, often in areas shrouded in clouds in the mornings and deluged with tropical rain in the afternoon. The plants found in commerce are usually hybrids involving the various species and sometimes the related genus Miltonia.

The Miltoniopsis orchids have sympodial growth (basal branching) and form a rosette of 3-inch-long, flattened pseudobulbs that give rise to a single leaf from the terminal end of the structure. Two to five leaves appear from the base of the pseudobulb, and from the juncture between the leaf and the storage bulb, the flowering scape emerges. Leaves are relatively thin textured, grasslike to 1 ½ inch wide and 12-16 inches long.

The fragrant flowers are 2-4 inches across, more or less round in outline and consist of six petals, the lowest of which is the largest and comprises the bottom half of the flower. Five to eight flowers are produced on the pendant scape which can be as much as 18 inches long. In the northern hemisphere, flowering is usually limited to the spring months of April through early June.

Like most orchids, the pansy faced orchids used to be called something else. In this case, they were first classified as species of Miltonia, based on the heat loving Brazilian group first named in 1837. By 1889 it was recognized that the cool-loving Columbian species did not comfortably fit into the group of heat lovers, and the name Miltoniopsis (Miltonia – like) was proposed but not widely accepted until 1975.

Several species of Miltoniopsis were first collected, including the beautiful M. roezlii, by Benedict Roezl (1823 – 1885), an intrepid plant explorer from Prague who collected in the Americas for more than 30 years. The one-handed collector, who wore a hook on his left arm, introduced over 800 new species to European collectors.

The pansy faced orchids are not as frequently seen in commerce as the almost ubiquitous moth orchids (Phalaenopsis), but they are a springtime treasure. Most domestic production for the flowering pot plant trade appears to come from southern California and Hawaii.

Pansy faced orchids should be kept uniformly moist where the daytime temperature is in the high 70⁰F range and the nighttime temperature around 65⁰F. They should have bright light but not full sunlight. By keeping plants carefully watered – moist but not sitting submerged in water – they should remain in bloom for six to eight weeks.

If you wish to try to save them over to rebloom next spring, plan on repotting every year when blooming is complete. Remove the old orchid mix and replace with a high quality orchid mix, using an only slightly larger flower pot. Pansy faced orchids do best if not overpotted. The plant shown in the photo above is in a 4-inch pot and has nine pseudobulbs. In the summer, fertilize every two weeks with a diluted houseplant fertilizer.  During the winter months, locate the plant in a high humidity area and keep the nighttime temperature above 55⁰F. Flower scapes naturally want to droop, so staking will be required to create the blooms-on-top look we like to see in flowering pot plants.