In this political season there has been much said about political correctness. While I try to be polite, I sometimes have opinions that differ from the mainstream, making me politically incorrect. For example, I don’t always agree with the view that all invasive plants are bad. In my view, all plants are good and only a few – very few in fact – are bad. Japanese Stiltgrass or Bamboo grass (Microstegium vimeneumI) is an introduced annual grass that has lots of detractors, but in the right location it makes a nice groundcover in shady woodland settings. 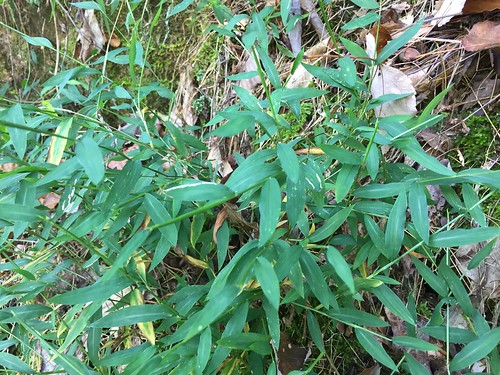 Japanese stiltgrass is a warm season annual grass native throughout much of Southeastern Asia and as far west as Nepal and India. It was accidentally introduced into Tennessee in 1919 as packing material used to pad porcelain figurines. Since that time it has spread throughout most of the eastern United States, including all ecoregions of Arkansas.

Though the literature reports it growing to five feet tall, the plants I have watched for almost ten years never get over about two and one half feet tall. It is thin stemmed, erect growing, with several basal stolons. It is usually seen in dense stands where the inherently floppy stems and stolons support one another.

The leaves are a half-inch wide and as long as 4 inches, and borne alternately up the stem giving the plant a bamboo-like appearance. The leaves have a silvery blotch on the upper surface along the vein, which can help identify the grass. As the grass dies at the end of the season, the leaves often takes on a golden brown color.

Seeds are produced in the fall from a terminal spikelet that is relatively obscure. On average, plants produce anywhere from 75-1,000 seeds, but typically closer to the lower number. Seeds remain viable in the soil for as long as three years.

Interestingly, Japanese stiltgrass has C-4 photosynthesis, a form of carbon fixation that usually requires full sunlight. In this species it has been shown that plants often grow in areas with 95 percent shade, though it will also grow in full sun, especially if the soil is wet. The grass is especially fond of floodplains, disturbed areas in the shade and roadside ditches.

My first encounter with Japanese stiltgrass was in a floodplain in the fall of the year. The swampy ground was covered by a knee high stand of the grass that had turned a pleasant golden color late in the fall. That same site, now 10 years later and with no outside intervention, has mostly reverted to other forbes and bushes. Though the increased diversity of today is what all the politically correct environmentalists want, the artist in me thought the knee high lawn of Japanese stiltgrass was more beautiful.

Controlling Japanese stiltgrass in the wild can be done but it would require a concerted effort over several years to deplete the seeds in the soil bank. Mowing to keep the plant from forming seeds is probably the most practical approach but will need to be done for at least a couple years. Preemergence herbicides effective against crabgrass are also effective against Japanese stiltgrass should it creep into a lawn setting, but I personally have never seen it spread into lawns.