It’s a bit scary when you realize you’ve been around long enough to see cycles repeat themselves. In gardening, cycles repeat on a regular basis. Most big cyclical trends repeat generationally, but sometimes they can be more frequent. Because there are so many plants that can be grown, plant providers tend to rotate plants in and out of availability on cycles of a decade or two. After more than a decade on the shelf, I’ve noticed that Melampodium is back from exile and is being reintroduced to gardeners. 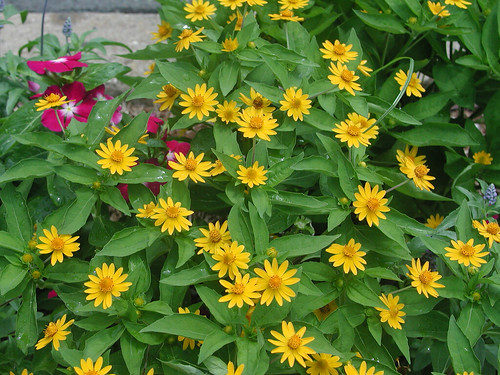 Melampodium is a genus of about 40 species in the daisy family native to Central America, the Caribbean region, Mexico and the southwestern states. Seven or eight species are native in the United States with Melampodium divaricatum listed as native in Florida and possibly Arkansas, Louisiana and Texas where it may occur as escapes. This species is the only one in general cultivation though some of the white flowered perennial forms from the desert southwestern states are grown in rock gardens.

In the wild M. divaricatum is a tall growing, floppy annual reaching two feet or more in height. A common name for the Melampodiums is “blackfoot daisy,” an allusion to the purplish-black stem-base and larger roots.

At an early age Melampodium sets flower buds terminally, causing the plant to branch freely. Most of the named cultivars – and as of now there are about a dozen available – have been bread for compact growth and spreading habit. They grow 12-18 inches tall with a spread equaling their height. Leaves are large, alternate, medium green in color with a mostly entire margin.

Inch wide yellow, daisy flowers with 12-15 petals are produced around a compact button of tubular disk florets about a third of an inch across. Individual flowers remain attractive for couple weeks, and then shatter, leaving little evidence of ever being there. This “self cleaning” characteristic makes them a plant that never needs deadheading.

The Melampodiums have been known since the time of Linnaeus who described the first species in the 1750’s. The genus name translates as “black foot,” again a reference to the dark base of the plants. I find no reference of any being grown – except the rock garden types – prior to the middle 1980’s when seeds of the first dwarf forms became available.

Allan Armitage, the now retired annual and perennial plant investigator at the University of Georgia, was one of the first high profile garden scientists to experiment with growing the yellow flowered Melampodium. He received seed in the 1980’s and first tried it as a potted plant for greenhouse forcing but quickly realized it was best used in the open garden.  Armitage obtained the seeds as selections of M. paludosum, (which translates “of swamps”), and in his subsequent writings and his popular book, uses the same name.

In 2008 the genus was revised and the species epitaph Armitage used was excluded, instead calling the plants M. divaricatum (translates as “spreading”). Most of the plant industry has stayed with Allan’s earlier usage, so there is a lot of confusion when doing an internet search.  In 1999 we named Melampodium an Arkansas Select winner, but it never attained widespread usage.

Melampodium is a good plant to use in sunny, somewhat neglected areas of the garden where it flourishes in the heat and humidity of an Arkansas summer. Plants are a good height for mass bedding or for use as a foreground planting for taller borders.  It blooms from first planting, provided the soil is allowed to warm first, until the first cool days of fall. Plants often reseed during the first season and may have young seedlings mixed amongst the older bedding plants that went out in the spring. Reseeding will occur but unwanted seedlings are easily removed where not wanted.