I kill lots of plants. Good gardeners pay close attention to detail, whereas average gardeners, such as me, plant lots of plants. Some survive, some don’t. If an oddball plant of mine survives, it probably has a degree of built-in toughness. I Recently received a collection of succulents known as false agaves (Manfreda and x Mangave, hybrids of Manfreda by Agave). I hope they survive in north Arkansas, but only time and trial will answer that question. 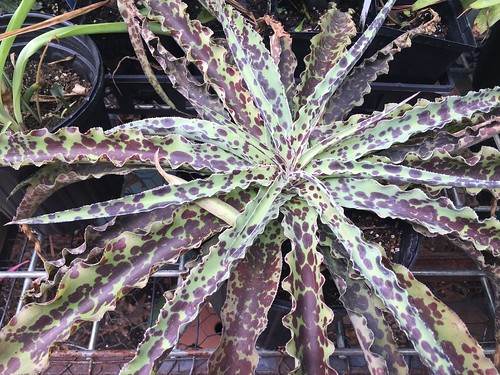 Manfreda are a group of at least three dozen species of succulent herbs of the asparagus family, native to the southwestern states and central America. Their placement in the classification schemes of botanists is ever-changing. Most recently, some taxonomists have moved them into the century plant genus (Agave), but still others keep them separate as I choose to do.

They grow in droughty or desert sites as rosettes of fleshy leaves emerging from a short, almost bulb like stem. In frost free climates Manfreda are evergreen, but in colder regions the leaves are herbaceous and die during winter. In the case of M. undulata, the leaves are to twenty inches long and an inch wide with wavy margins. This species, and many others, have interesting maroon spots on the fleshy leaves.

Flowers appear in late summer on spikes 3-5 feet tall. The blooms are of secondary importance and appear to be brown to maroon in color from the color of the many stamens. Unlike true agaves where flowering is a rare and lethal event for the rosette of leaves, Manfreda flower more or less annually and the rosette does not die.

The Manfreda collection came to me directly from the collection assembled by the late Dr. Jon Lindstrom (1959 – 2013), a University of Arkansas Horticulturist and extreme plantsman. In turn he had received most of his plants from Yucca Do Nursery in Hempstead, Texas. John Fairey and Carl Schoenfeld made more than 90 collection trips into Mexico looking for plants adapted to the southern Texas, many of which they introduced through their nursery, which opened in 1986.

A couple things give me hope that these Manfreda will survive in Northwest Arkansas. First, the greenhouse where Jon had his plants growing had a heater failure the winter after he died, and nearly everything inside was killed because the temperature dropped to 5⁰ F. Secondly, rattlesnake master (M. virginica) and tuberose (Polianthes tuberosa) are both closely related and either grow here wild or will survive our winters.

I have held some plants in reserve to plant out next spring to permit longer establishment time for the roots system before they must endure a winter. But others I planted this fall in my rock garden. Good drainage to guard against winter-wet and full sun seem like the best conditions for success. Hopefully they will all survive, but even if they don’t, I will have learned something about an interesting group of plants. As I’ve always said, if you’re not killing plants, you’re not trying hard enough.