What plants are worthy of taking up space in an individual garden is an open question. Some gardeners are ruthless editors, removing anything that doesn’t measure up to their high standards.  While others of us are more lackadaisical, allowing some ho-hum plants room to grow because they fill space, are really no bother and have some characteristics we find endearing. Winter honeysuckle (Lonicera fragrantissima) is such a plant. 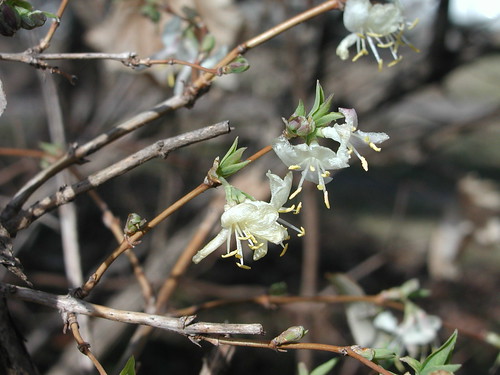 Winter honeysuckle is a member of the honeysuckle family. About 180 species are described, with a third of them native in North America and the remainder scattered across Asia and Europe. This species is native to central China.

This semi-deciduous shrub grows 6-8 feet tall with an upright to oval form. In the winter it has a brushy look about it with the twigs having a tan colored appearance. It has ovate, opposite leaves 2-3 inches long that will mostly drop over winter in colder climes while remaining evergreen in milder winters.

In January it begins to produce inch-wide pairs of white, translucent blooms with exerted stamens along the branches. The flowers are delightfully fragrant with a hint of lemon bunt cake (some say scented fabric softener sheets). The flowers are not especially showy except up close but the fragrance disperses widely. Flowers are produced over several months, opening and wafting their sweet fragrance on warm days throughout the garden. If fruit are formed, it takes the shape of a pair of red berries hidden beneath the leaves.

Winter honeysuckle was introduced by Robert Fortune (1812 – 1880) on his first expedition to China just after the English had forced that country to open to western traders after the first opium war (1839 – 1842). Fortune traveled as a plant collector under the sponsorship of the Royal Horticultural Society of England. He managed to gather up 250 new plants and ship them home where they arrived in 1845. Of these, only 35 of the plants died on the long sea voyage, a good result for that era.

This shipment was an important addition to the gardening world for it contained, in addition to the winter honeysuckle, the first forsythia, the first weigela, bridal wreath spirea, three still-important viburnums, the reintroduction of bleeding heart, balloon flower and pop-pom chrysanthemums. Winter honeysuckle was first mentioned in an American gardening catalog in 1860.

Honeysuckles, especially the vining Japanese honeysuckle and the shrubby, late-spring flowering Mack’s and Tatarian honeysuckles, have been greatly maligned as garden plants because of their well-reported escape from cultivation. Winter honeysuckle, while escapes are reported on the USDA plant distribution map, does not have the invasive potential of its more aggressive kin. Over the past two decades I’ve irradiated several thousand Mack honeysuckle from woodlands in northwest Arkansas, but I’ve only encountered one escaped winter honeysuckle.

Winter honeysuckle is a fast-growing shrub that needs no attention once established. It is well suited to sunny or medium shade locations in about any soil. It is too ugly for a prominent location in the landscape but can be tucked into a mixed shrub border or planted at the edge of the woods where the sweet fragrance can still be enjoyed. Its branches can be cut and brought indoors for forcing into bloom.