August is a tough month in Arkansas gardens. Most sensible plants bloom at a more hospitable season, avoiding what is arguably our nastiest month. But, then when you do an August walkabout, you find plants that seem to flourish in hot, humid weather. One of these is the Formosa lily, Lilium formosanum. 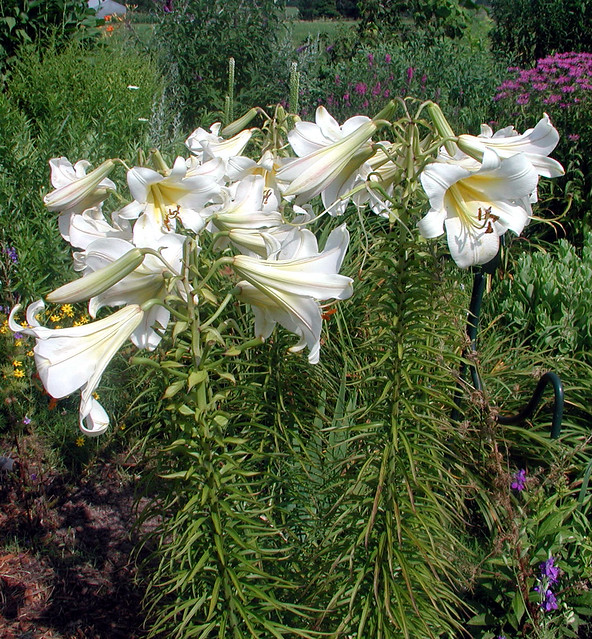 The Formosa lily is one of the hundred plus described lily species found throughout the world. It is native to Taiwan and the southern islands of the Japanese Archipelago, where it grows from sea level locations up into the mountains. Taiwan was known to the western world as “Formosa” (a Portuguese word that translates as “beautiful island”) since its discovery in 1542, but since the early 20th century the Chinese name for the island has replaced the older name.

This lily grows 5-7 feet tall with relatively slender, straight and strong stems clothed in narrow, almost grass-like leaves. From one to three stems can be produced per bulb. It blooms in August and September, making it the last of the lilies to flower.

From two to seven, 6-inch-long fragrant white blooms, sometimes marked with reddish-purple bands, are produced at the ends of the stems. The Formosa lily is closely related to the Easter lily but in the Formosa lily the flowers are more funnel shaped, appear two months later in the season and lack the thick texture found in Easter lily flowers.

After flowering, the Formosa lily produces erect growing seed capsules that reach 3 inches long and persist into the winter months. The seed capsules have their own ornamental appeal and are used in dried flower arrangements. Some gardeners spray paint the capsules various bright colors where they look like a whimsical collection of colorful candelabras.

Interestingly, this is the only lily species that can and often is grown from seed. If seed is planted indoors in January, blooming plants can be had by late summer. In moist locations, it is not unusual to find plants reseeding in the garden.

The Formosa lily was first described by Alfred Wallace in 1891, from bulbs he had received 10 years earlier. It seems to have gained little traction in the plant world until a century later, when it was rediscovered during the new plants craze of the late 20th century. I recall first hearing about the plant at a plant meeting somewhere when the speaker described seeing it growing in roadside ditches of Australia, where it seemed to be running wild. Of all the lily species, it is probably the easiest to grow and, from what I have seen, long lived in the garden.

Plants can be planted from bulbs or seeds. It is best in a sunny, fertile site with good summertime moisture and sharp drainage during the winter months. It is said to be susceptible to lily mosaic virus but I’ve not seen problems with the disease in northern Arkansas. It is hardy from zone 6 through 9, perhaps doing even better in the southern end of the growing range. Unlike other lilies, I’ve never seen the occasion where staking was needed to support the tall stems.