We’ve all had the experience. The tag says it is dwarf, but before long it is big enough to shoot squirrels out of. A couple of weeks ago, I visited the Louisiana State University Agricultural Experiment Station in Hammond, LA and found examples of the dwarf crapemyrtles the University of Arkansas released almost 50 years ago. These dwarfs were fine specimens, about 25 feet tall. Dwarf, not so much. 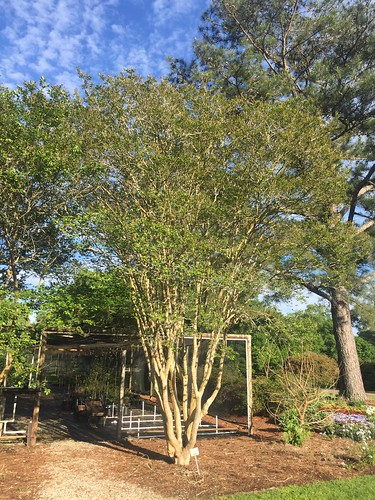 The U of A dwarf crape myrtles were released by Dr. Al Einert, a horticulture professor on the Fayetteville campus. They were released in 1973 from material selected from seedlings grown by Dr. Victor Watts, the long-time chairman of the Horticulture Department. Dr. Watts had gotten his original crapemyrtle plants from Otto Spring, an Okmulgee, OK nurseryman and plantsman who was at the top of his game in the 1950’s.

The four crape myrtles Dr. Einert released, “Victor” (red and the only one still in the trade), “Centennial” (lavender), “Ozark Spring” (pinkish-lavender) and “Hope” (white), were described as three to 5-foot-tall dwarfs that had good powdery mildew resistance. He was looking for foundation planting size plants that would have an azalea size but be summer blooming.

To understand the idea of calling these plants dwarf, we must remember the past. Fifty and 60 years ago, crape myrtles were almost unknown in north Arkansas. It got too cold, and every three to five years they would freeze to the ground. Now, with global warming, weather patterns have changed and the freeze-backs only occur once every 20-25 years in this region. Dr. Einert recognized that these were not true dwarfs, but slow growing plants. To maintain their dwarf stature, the protocol recommended cutting the plants to the ground every spring. In southern Louisiana, where winter kill never occurs, the plants were allowed to grow and made fine, standard specimens.

But now there are true genetic dwarf crapemyrtles on the market. Robert Hambuchen, a nurseryman from Conway, AR, has patented a series of prostrate growing crapemyrtles, including ‘Rosey Carpet’ (pp 13,965) in 2003 and ‘Cascading Pink Lady’ (pp 19,277) in 2014. These have a horizontal spreading habit and have even been promoted for use in hanging baskets. Interestingly, the patent application for “Rosey Carpet” says the plant trait was found in plants from Okmulgee, OK, so there’s another Otto Spring connection.

But the biggest driver for normal, shrub-like crapemyrtles came from Dr. Don Egolf’s crape myrtle breeding program at the U.S. National Arboretum. The super dwarf “Chickasaw” came in 1997, and my fifteen-year-old plant is less than a foot tall. The more robust ‘Pocomoke,” released in 1998, grows to just over three feet tall and is the basis for the Razzle Dazzle series developed at the University of Georgia by Dr. Mike Dirr which were introduced in 2006 and now includes a red, pink, raspberry red and white selections. These plants also have good powdery mildew and Cercospora leafspot resistance.

Dwarf crape myrtles add to the plant choices available for home gardens. Plants are well suited for sunny sites and are drought tolerant once established. Dwarf forms don’t need to be sheared back each season. In fact, shearing back should be avoided. Many of the dwarfs have low fertility, so they don’t set seed freely and continue to bloom through the summer and early fall.