I never met a tree I didn’t like, though there are a number of trees I’ve resisted planting. Like the bad kids our mothers warned us not to hang with, a number of trees have a sullied reputation. Golden Rain Tree (Laburnum x watereri ‘Vossii’) is such a tree. Beautiful to look at on a European vacation, but better left there. 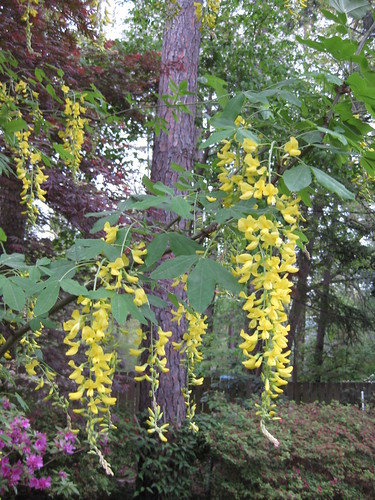 Laburnum is a genus of two species of the legume family native to the mountains of central and southern Europe where they potentially grow to 20 feet tall, round-topped specimens. “Vossii,” a late 19th century hybrid selected by a Dutch nurseryman from a cross between the two species, L. alpinum and L. anagyroides, is the only Laburnum likely to be found in the American nursery trade.

Golden chain tree is an upright growing, stout-branched tree which remains green into old wood. It has opposite leaf arrangement with trifoliate compound leaves with leaflets one to two inches long. Out of flower and during their slow, sometimes two-decade-long establishment period, they are often described as “scurfy” or “weedy” looking.

But in flower, especially if seen on that afore mentioned European vacation, they are stunning. The variety ‘Vossii’ has fragrant, yellow, two-foot-long pendulous panicles of blooms in mid to late spring. A well-established tree will be cloaked in these panicles. Individual flowers are pea shaped and to about an inch long. “Vossii” is said to be sterile and not to produce the legume pods borne of the species.

Laburnums have been grown throughout Europe for at least 400 years as garden plants, attaining the kind of status there that flowering dogwood does here. As with dogwoods, which are not especially well suited to European gardens, golden chain tree has not exactly flourished in the United States. It is best suited to the New England states and the Pacific Northwest.

I have only seen two specimens in north Arkansas. One was young and flourishing while the other was languishing. Heat intolerance seems to be its major adaptational challenge. Considered hardy from zones 5-7, it is best planted where it gets bright light and some afternoon shade. I planted two clones last winter so will be able to add to the discussion in a more meaningful way in the years to come.

All parts of the Laburnum are poisonous and every reference cautions against planting them where they could do harm. But, as with the majority of cases of using poisonous plants in gardens, reports of deaths are hard to find. In our overly protective world where we worry about minutia while ignoring lifestyle choices known to cause harm, laburnum poisoning is closer to being hit by a meteorite than a child being accidentally killed by an unsecured gun.

Golden chain trees are probably best relegated to the plant nerd types than average gardeners. It should be planted in fertile, well-drained soil. It tolerates dry conditions just fine, but dry and hot are a lethal combination. Locations where it receives afternoon shade are best or next to the north or east wall of a structure. Pruning should be avoided unless it is lower limb removal to facility movement in the garden.