Plant of the Week: Kurume Azaleas

Who doesn’t love a centennial celebration? This is the 100-year anniversary of the famous plant explorer E. H. Wilson’s 1918 trip to Japan, where he selected and introduced (in 1919) his famous list of Wilson’s 50 azaleas. While these showy, winter hardy azaleas were not the first azaleas introduced into the United States, they were the first cold hardy evergreen selections that could be grown north of the Mason-Dixon line. 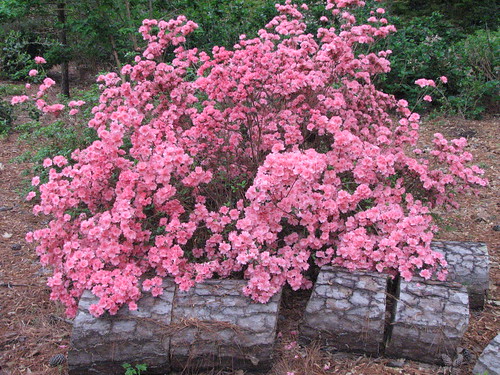 The original Kurume azaleas are a group of compact, relatively slow growing evergreen azaleas with relatively small flowers that were developed (or collected) by Japanese nurserymen from the mountains of Japan’s southernmost island, Kyushu. Wilson first became aware of the azaleas when he visited Japan in 1914 and 1917. He found that they had been treasured by the Japanese people for use as bonsai or highly pruned — often in the shape of an umbrella — potted specimens. In his time, there were said to be 250 named clones derived from four species of evergreen azaleas native to the volcanic mountains of the region.

Wilson introduced his 50 clones, wrote a book on azaleas and promoted them to the garden elite of the country, but he was not really responsible for getting them into the hands of gardeners. In 1915, Kojiro Akashi of Kurume, Japan exhibited a dozen azalea clones and a total of 30 plants in the Pan-Pacific Exposition in San Francisco where he received a gold metal for his efforts.

The Domoto Brothers sold many of their imported azaleas to Cottage Garden Nursery on Long Island, who in turn sold them to Bobbink and Atkins Nursery in New Jersey. In the 1920’s the Bobbink and Atkins Nursery began one of the first azalea breeding programs using the evergreen, cold-hardy clones. Domoto’s importation of azaleas stopped in 1920 when plant quarantine procedures resulted in the loss of most of the shipment of 5,000 plants, including a number of new clones. Then, as now, imports were a contested political issue and, at least from my reading, it seems quarantine laws were as often used as an economic lever as a means of stopping the spread of pests.

It was not long after the introduction of the Kurume azaleas into the United States that now-famous plant breeders such as B. Y. Morrison started combining the cold hardy Kurumes with the large-flowered, but less hardy Indica azaleas of the South. About the same time, Joseph Gable began breeding for even more cold hardiness using Korean azaleas. And so the beat goes on, with now more than 12,000 cold hardy azalea clones selected (if not commercially available) for gardeners to use in their beds.

The Azalea Society of America will hold its annual convention in Little Rock April 5-7, 2018.  This is the first time the group has met in Arkansas. We plan to have some of John Carden’s azaleas for sale at our plant sale. He was a long-time postman and azalea nurseryman from Fort Smith who developed about a dozen selections known as the Carden-Harris azaleas. Check the ASA website for details on the convention.