My youngest sister Kenda ended up with many of the old family photos and she has been kind enough to share them through Facebook with the rest of the family.  Last week she shared a 1915 photo of my grandfather and future grandmother out courting in a horse and buggy on the Oklahoma prairie.  Not a tree in sight, which is a far cry from today where trees, including the ubiquitous eastern red cedar (Juniperus virginiana), often cover the land. 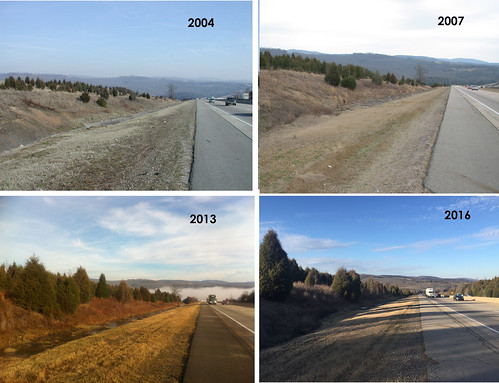 Cedar trees, as they are almost universally known, range across the eastern half of the United States, including all of Arkansas and most of Oklahoma.  In 1819 when Arkansas Territory was established, it included almost all of present day Oklahoma.  It was separated in 1824 to become Indian Territory.  The eastern third of the Sooner State has many of the same climatic and physical features as the western half of Arkansas.

Eastern red cedars, conical evergreen trees growing to 60 feet tall, are dioecious with either male or female plants.  The male plants take on a rusty color in February and March as a result of the male cones which shed copious amounts of pollen and are the cause of much allergy distress in early spring.   The gray-blue berries of the female trees are eaten by a wide variety of birds in the spring and germinate readily in moist soils.  But, thankfully, not every seed that germinates makes a tree.

Birds deposit seeds where they will.  Often, they perch on fences and a long row of cedars down a farmer’s untended fence line will be noticed.  But it is equally common to see juniper seedlings in open fields growing amongst the grass, apparently jettisoned as the birds flew over the area.  Seedlings that germinate in shady sites form slender, wimpy plants.

In his 1858 account of riding the Butterfield Trail from Missouri to San Francisco, W. L. Ornsby described northwestern Arkansas at the time as; “Even among the hills you do not loose site of the prairie nature of the West; for just after leaving Fayetteville you see a fine plain, surrounded with hills – in fact, a prairie in the mountains.”

The prairie nature of this part of the state was not, strictly speaking, a product of just evolutionary forces.  Native Americans burned the prairie grasses on a routine basis to make it easier to hunt buffalo and deer. These fires killed seedling trees of all kinds.  Junipers, especially sensitive to grass fires, survived these burnings by growing on dry, rocky ridges where the grasses could not flourish.

In my Oklahoma home, reports of cedar brakes along rocky ridges adjacent to the Cimarron River appear.  Many early settlers of the prairie planted a double row of cedars down the approach to their home as an adornment.  Others, with a more practical bent, used them as windbreaks.  It was from these trees that cedars spread to pastures and, once fences were used to cordon off property, fence rows.  Without fire to keep the young junipers in check, they had their way with the land.

The accompanying photo illustrates how – in just a couple decades – the landscape can be changed.    Unfortunately, I don’t have a photo from this spot when I-49 first opened about 2000, but the roadside was a newly seeded grass shoulder with no trees.  As a right of way cover crop, these native junipers have found a good home.  The site is droughty by nature, exposed to plenty of sun and generally to their liking.  If you were running cows on a piece of ground with this many cedars, your herd would be scrawny indeed, for junipers are fierce competitors and nothing grows beneath them.