FAYETTEVILLE, Ark. -- Fortunately plants come in all shapes, sizes and colors so it is possible to compose in our gardens intricate and interesting plant arrangements.  One such plant form is often described as “filler” plants – those plants that spread a bit but neither gets too tall nor wide.  Blue Star or Laurentia (Isotoma axillaris) is a soft textured rather delicate looking plant that is often considered an ideal filler for the mixed flower border. 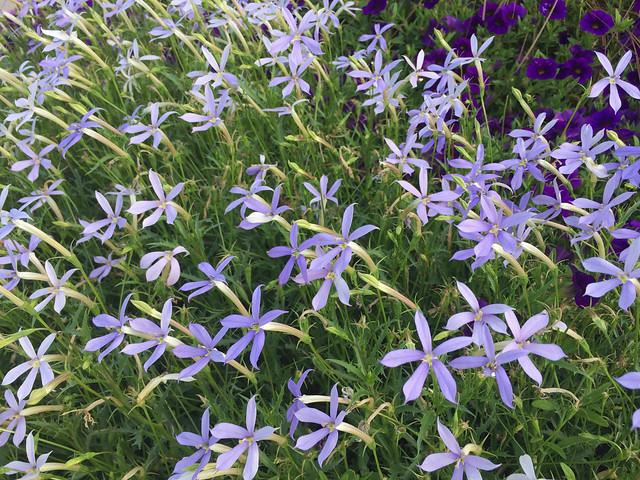 Blue star is one of a dozen species of annual and perennial herbs of Australia and New Zealand that belong to the campanula family. Isotoma axillaris was originally described in 1826, collected from a cow pasture near Sydney. Over the years it has been classified as a Lobelia or in a separate genus Laurentia, by which name it is still listed in nursery seed catalogs.

Blue star is a freely branched plant growing in a mounded habit to a foot tall with a spread of 16 inches. It has sessile 3- to 4-inch long, willow shaped leaves with a series of long pointed tooth-like lobes. In its native range it is a tender perennial developing a deep taproot and a woody base, but in gardens is usually treated as an annual. Some sources list it as winter hardy into zone 7 while others say it is only hardy in frost-free areas. Where hardy it has a more sprawling habit while young but becomes more upright once the woody base forms.

Flowers are produced singly from leaf axils and are to an inch and a half across, 5-lobed and borne at the end of an inch long slender tube.  Most forms are a soft sky blue but purple, pink and white selections are available. ‘Beth’s Blue’ is the most commonly available vegetatively propagated form while ‘Avant-Garde’, a series of F1 hybrids offered in shades of colors from white to violet, is the most common seed grown form. Plants bloom from seed in 4 months with transplants not set out until the threat of frost is past.

Blue star was grown during the 19th century but by the early years of the 20th century seems to have fallen by the wayside. It reappeared in the 1990s with the new plant craze that swept across the garden world.

Blue Star should not be confused with Blue Star Creeper (Isotoma fluviatilis), a related plant that grows only an inch tall and is covered with quarter inch blue flowers during the spring and summer. This evergreen creeper is used to grow between stepping stones and as a groundcover. It is listed as a zone 6 plant but I’ve had trouble keeping it more than a year or two, possibly because it is really a zone 7 plant or because it has a requirement for evenly moist soil conditions than I can’t provide.

The annual blue star is a lovely plant but is not as bulletproof as the catalogs promise.  Though said to bloom all summer long, it seems to suffer in the muggy heat of an Arkansas summer.  Places with a more Mediterranean climate -- California, for example -- or areas with cooler summers probably would have better luck keeping it blooming through the summer. Shearing back will stimulate continued blooming but only if the foliage is not in decline which often happens in areas with muggy summertime weather.

Blue star makes a nice addition to patio containers, mixed flower plantings or the front of borders. It has a delicate form and a controlled habit of growth so it is an ideal filler plant.  From my experience it is at its best from May through mid-July.

For more information about horticulture, or to see other Plant of the Week columns, visit extension’s website, http://uaex.uada.edu/yard-garden/resource-library/plant-week/ or contact your county extension agent.

For more information about horticulture, or to see other Plant of the Week columns, visit extension’s website, www.arhomeandgarden.org/plant_week.htm, or contact your county extension agent.