Spring arrives here in my little corner of the Ozarks. Crocus started showing a few scattered blooms in mid-January and today Iris reticulata is in full glory.   According to my less than perfect recollection and what few scattered bits of information I’ve recorded over the years, her arrival is at least two weeks ahead of schedule. But nature makes her own schedule and the rest of us can but push back in our easy chairs and enjoy the ride. 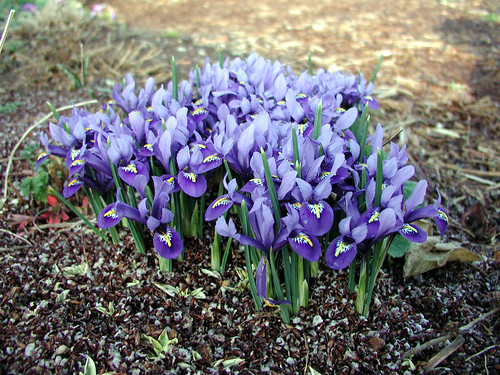 The reticulated iris, one of about 300 species of irises, is so named because of a net-like pattern on the surface of the bulb. It is a better indicator of the progress of the season than its cousin crocus. As crocus corms pass time in the garden they tend to migrate towards the surface because the new corm forms atop of the old one. After a few years of this dog-piling they may be so shallow that the first rays of winter sun will spur them into bloom. But the reticulated iris reproduce in a responsible fashion - from offsets on the side of the bulb - so it’s bulbs stay at the depth they were planted and give a better measure of soil temperature.

Reticulated irises belong to a subgenus of ten closely related species scattered through Eastern Europe and Central Asia. Iris reticulata is a small plant, usually five to six inches tall when they flower. The deep violet to purple or even blue flowers, highlighted by markings of white, silver or gold, appear as the foliage is just beginning to push skyward. Individual flowers are to two inches across with the characteristic three-spoked iris flowers when viewed from above. The falls are small and to only half an inch long while the standards are to two inches tall and held erect.

The grayish leaves are four-sided and eventually reach 16 inches in length. They have a kind of rush-like appearance but are a bit floppier. The reticulated iris is native to the Caucasus Mountains of southern Russia, the range which is generally considered the dividing point between Europe and Asia.

Of the bulbous irises, this species and the yellow flowered I. danfordiae, are the most common of the late winter flowering types. While the reticulated iris blooms for about two weeks, blooms of the Danford Iris are as fleeting as a wintertime visit by a gaily colored butterfly. ‘Harmony’, the most common of the reticulated iris clones, is actually a hybrid between the Turkish I. histrioides and I. reticulata.

The reticulated iris is said to be extremely fragrant but I have not noticed this characteristic even when we’ve forced it in pots. Considerable interest in breeding the reticulated group exists amongst hobbyists, the most prominent of whom is Canadian Alan McMurtrie, who has been working with these plants for over thirty years.

Using the small bulbs in the garden is easy. Because they are so small and bloom so early, they should be located where they can be enjoyed during the comings and goings of late winter. I like to plant these small bulbs under creepers such as phlox or the cottage pinks, thus double-cropping the same piece of ground for flowers. This also prevents me from inadvertently disturbing the bulbs during my periodic quests for a spot to plant a new treasure.

Reticulated irises are trouble free performers and persist for years in the garden, though division just as the foliage is dying once every five years will help maintain vigor. They are said to be best planted in well drained soils that dry during the summer, but bulbs have persisted for four years in one of my irrigated flower beds and bloomed well each year. Bulbs are planted about four inches deep and are commonly available in the fall from bulb merchants. They are hardy from zones 4 through 9.