Poinsettias still own Christmas as a holiday plant, but I sense some loss of luster amongst consumers. The oft-bedraggled little guys being pushed by the mass market stores just look sad. But what do I know about marketing? I’m just a plant guy. With entryway decoration now a staple of American front stoops, it is not surprising nursery growers are trying to find plants that will work outside in the cold. One of the new entrants into this market are the variegated English hollies, Ilex aquifolium. 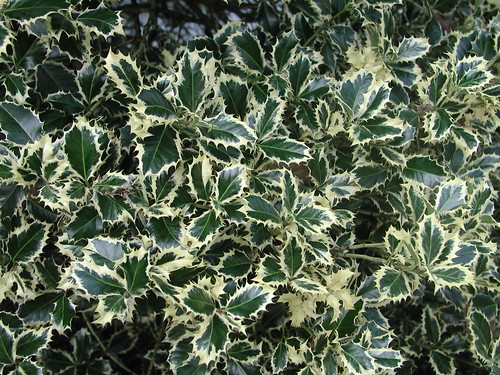 English hollies are evergreen trees native throughout much of Europe and England, from where they were introduced during early colonial times. George Washington grew them at Mount Vernon. Though there are about 500 species of hollies scattered in both hemispheres, English holly is the only remaining species native to Europe. Hollies are classified in their own family and represent a group of plants that have a long evolutionary history.

English holly is technically a tree capable of reaching 50 feet or more in height but is seldom seen in landscapes over 10 feet in height. It has alternate, 2-inch-long leaves that look like they have been polished with floor wax. Leaves are armed with a dozen or more sharp spines.

Though several dozen cultivars of English holly are offered, the variegated forms are most often seen in nurseries. “Argentea Marginata” has a broad white-margined strip while “Aurea Marginata” has a yellow margin. Both are female clones but red berries are seldom seen because of lack of a pollinator. Like all hollies, these clones tolerate shearing with ease and can be grown as hedges or whatever geometric form is desired.

In late spring, small, seldom noticed, pinkish-white four-petaled blooms are produced in the foliage. Because plants are dioecious, with either male or female plants, both sexes must be present for the red berries to form.

Hollies, or at least their ancestors, were part of a great evergreen laurel forest that spread over parts of the ancient continents that joined and separated during the Mesozoic era between 250 million and 65 million years ago. Hollies have what can be called a Gondwanan distribution. While fossil records and DNA based age determination methods don’t support hollies being around in the middle years of the Mesozoic, their presence in Australia and South America is an indication that an ancestor to the group must have been there.

English holly is a beautiful shrub, but it has a couple fatal flaw. It prefers a maritime climate, such as found in the coastal regions of the northeastern states and in the Pacific Northwest. It has little tolerance for drought, summer heat and warm nights as found in the much of the Midwest and South. And it is not very winter hardy, only surviving temperatures down to zero, which makes most of the upper Midwest out of bounds.

But as a part of a holiday decoration package, it will work well. It is bright and cheery and nothing evokes the nostalgia of Christmas like the wreath of hollies Druids used to wear on their heads to ward off evil spirits. English holly is hardy throughout Arkansas, but site it in a bright location with some high shade or afternoon shade. The north side of the house where the plant receives water from the roof would make an ideal location.