A friend who relocated to northwest Arkansas from Dallas has asked me to explain why his hydrangeas that bloomed so well in Texas don’t offer much further north. The hydrangea in question is the bigleaf hydrangea, Hydrangea macrophylla. Instead of worrying about flowers, maybe he should plant the variegated forms and just rely on their handsome leaves to provide the color. 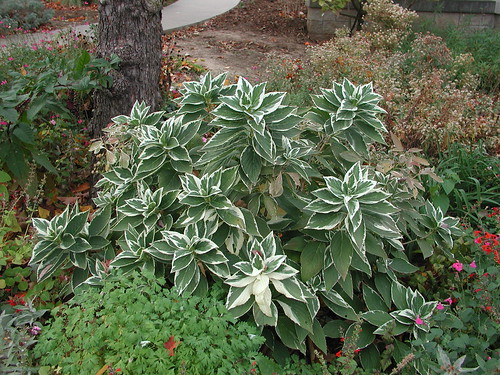 Hydrangeas consist of about 70 species of woody shrubs belonging to the hydrangea family, with most species found in Southeastern China and Japan, although five species occur in the southeastern states with one or two species native in Arkansas. The bigleaf or florist hydrangea, so common across the southern states, is native to Japan and has been in western gardens since the middle of the 18th century.

The variegated hydrangea has the typical growth form of its non-variegated original, but has – depending on the selection – a wide band of white, cream or even gold on the margins. These crown-forming, semi-hardy deciduous shrubs grow 4-6 feet tall and wide. The opposite, coarse textured but elegant leaves are to 6 inches long with serrate margins. Their winter form, a series of naked, finger-sized sticks protruding pincushion style from the ground are off-putting to the uninitiated who don’t realize that these stems are the hope for next summer’s flowers.

The bigleaf hydrangeas bloom in early summer in shades of blue, pink or occasionally white. The most common form, the large, rounded head of blue or pink flowers, are sterile and can be the size of a dinner plate. These types are called the mopheads, the florist or the Hortensia hydrangeas. Somewhat less common are the lacecap selections which produce a pinwheel inflorescence with an orbit of broad, sterile florets surrounding a dense cluster of small fertile flowers on the inside. Most of the variegated hydrangeas are of the lacecap kinds.

Bigleaf hydrangeas, except for what are called the remontant (reblooming) selections, bloom on stems produced the previous growing season. These seaside hydrangeas are grown to perfection in areas with a maritime climate. In less than optimum conditions they don’t harden their stems off properly and oftentimes an early, hard freeze will kill the stems or developing flower buds in late fall.

Additionally, bigleaf hydrangeas come out of dormancy early in the spring, and if the flower buds weren’t killed over winter, they are often killed by a hard spring frost. In areas such as central Arkansas, they might provide a good display two out of three years. Here in northwest Arkansas, you can expect a good bloom display one year in five. Plants in sheltered locations next to the south side of a house often fare better and give false hope that these showy hydrangeas will do fine in other, less sheltered parts of the garden.

Growing a variegated bigleaf hydrangea as a foliage plant in the landscape may seem a bit fatalistic to gardeners who – by their very nature – are optimists. But in regions such as northern Arkansas where wintertime temperature swings come hard and fast, a bit of reality is in order. And, once in a while the plants might actually bloom, providing a bonus for the garden.

Bigleaf magnolias are best planted in shaded but moist locations that have good indirect light. A favorite location is often the north side of a house where the roof provides both the moisture and summertime shade, but the colder location increases the odds of the stems freezing before the wood hardens off. These hydrangeas tend to be thirsty during the summer, especially if exposed to the sun, so be prepared to water as needed during dry spells. Delay pruning until new growth begins in the spring. Then cut out any and all dead wood.

For more information about horticulture or to see other Plant of the Week columns, visit Extension’s Website, http://www.uaex.uada.edu/, or contact your county extension agent. The Cooperative Extension Service is part of the U of A Division of Agriculture.