A characteristic of gardeners is plant lust. We always want to grow things that are just out of our reach. We try to grow plants that we know want cooler weather, warmer winters, or better soil, yet we try anyway. The hardy amaryllis (Hippeastrum x johnsonii) is just such an example. 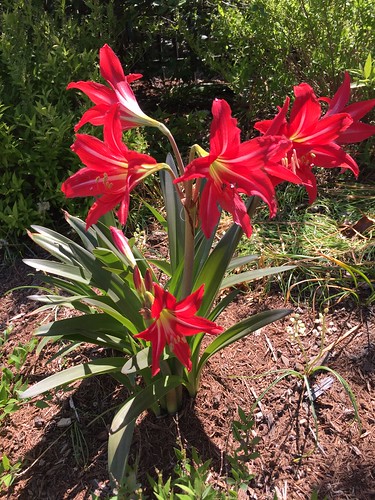 The hardy amaryllis, also called St. Joseph’s lily, is blooming in the garden. I’ve only had it through two winters but it came to me in the usual way, as a pass-along plant from a gardener near the Missouri line who has grown it for a number of years. While most amaryllis hybrids will be killed if the soil freezes, the hardy amaryllis will survive without harm through zone 7, and perhaps even further north if protected by heavy mulch or an insulating cover of snow.

There are about 90 species of amaryllis (Hippeastrum) from South America, and these have been used to create hundreds of hybrids that are popular mid-winter flowering plants sold for forcing. Two primary distribution centers are known for the genus; one in warmer, more tropical eastern Brazil and one on the Peruvian-Bolivian border, where they range in elevation from about 2,200-9,000 feet.

The hardy amaryllis is a hybrid between H. reginae and H. vittatum. The first species is found in a wide swath of Brazil and Peru while the second is from Peru and probably accounts, depending on how high up the mountain it was collected, for the winter hardiness of the hybrid.

The hardy amaryllis grows 18-24 inches tall with four to six blooms produced on a stout, hollow scape that pushes from the bulb. Individual flowers are to 5 inches across, slightly fragrant and bright red with a central white stripe down the center. Blooms usually appear in late spring.

Leaves are to 2 inches wide, to 2 feet long and bronze colored when grown in the sun. The foliage yellows and dies in late summer. In milder areas, it may reemerge in the fall and overwinter unscathed through the winter but in colder climes it will freeze to the ground. The bulbs are smaller than the typical forcing amaryllis but increase quickly, resulting in a colony of plants if left undisturbed for a number of years.

The hardy amaryllis is believed to be one of the first hybrid amaryllis, produced between 1799-1810 by English watchmaker Arthur Johnson. Johnson shared some of his bulbs with the Liverpool Botanic Garden and the plant was saved for posterity because Johnson’s greenhouse was destroyed by fire in the early years of the 19th century. The bulb was probably introduced to the United States sometime during the 1830’s where it became popular outdoors in Southern gardens.

Surpassed by showier but more tender amaryllis hybrids, Johnson’s amaryllis fell from favor with commercial growers but survived as a pass-along plant shared amongst family and friends across a wide part of the South. The heirloom bulb movement which emerged as a minor horticultural revival in the 1990’s saw the plant reintroduced to the gardening world after almost two centuries of obscurity.

Hardy amaryllis is an easy-to-grow bulb. It is tolerant of acidic or alkaline soils and tolerates clay better than would be expected, provided the wintertime drainage is adequate. It grows well in full sun or light shade. Like any plant, better soils yield better growth, but if the bulbs have found a site where they are happy, it is very much a fend-for-itself kind of plant. In colder climates, planting on the south or west side of a structure will provide extra protection during the winter.