I’ve been out prowling the back roads of Arkansas, Kansas and Oklahoma the past few weeks and have seen lots of pretty sights. Of the wildflowers, the sunflowers have been especially showy. And of the sunflowers, probably the most striking of the lot is narrowleaf sunflower (Helianthus angustifolius). 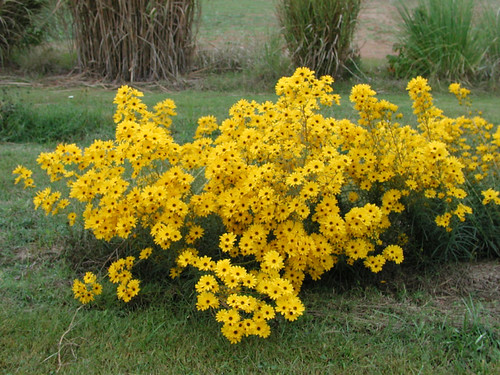 Narrowleaf sunflower, also called swamp sunflower (for it grows well in low, swampy places such as bar ditches), is a native herbaceous perennial of the huge daisy family, which has more than 19,000 species. It is one of about 70 species of sunflowers, all but three of which are native to North America. The three oddball species have simply migrated south into Central America.

Helianthus angustifolius is native from Long Island to east Texas. It’s county by county distribution map shows it favors the low lying Gulf Coastal Plane, but it does follow major water courses inland and occurs in all of the southeastern states, including Arkansas. In Arkansas it is not native on the Ozark Plateau, but otherwise is in every county.

How tall do narrowleaf sunflowers grow?

In the wild, narrowleaf sunflower grows 4-8 feet tall from a branched, colonizing crown that spreads outward at a moderate rate. It usually has hairy stems with narrow, willowy, scratchy leaves that are 3-6 inches long. The leaves have three linear veins.

Flowering shoots with 3-16 heads appear in late September and October. Individual heads are 2 inches across with 10-20 bright yellow to yellow-orange ray flowers surrounding an eye of 75 brownish disc florets. The seeds are favored by many song birds and produced into the fall.

Narrowleaf sunflower is perhaps the showiest and best behaved of the native perennial sunflowers, but it is still rambunctious and scary for gardeners desiring exacting control over their gardens. It spreads fairly quickly, it will reseed and it can get tall enough to topple over when in bloom. Because of the fear factor, it and other perennial sunflowers are seldom seen in manicured gardens. Embracing native plants in the garden is a popular notion, but to do so wholeheartedly requires accepting them for what they are, not what you wish them to be.

Relegating these wildlings to the woodland border or out back by the drainage ditch is one way of using them, but another way is to accept their basic character and try to find an isolated, sunny spot in the garden proper where they can just be allowed to grow and do their thing. Yes, they will get big and a bit unruly, but their bright glow in the autumnal landscape is worth it.

How and when do you prune narrowleaf sunflowers?

A June cut-back pruning will also help control size, or you can try to find dwarf selections. “Low Down” (2-3 feet tall) or “First Light” (yellow, 3-4 feet tall) are more compact and provide a more gardenesque look from this rambunctious species.

Narrowleaf sunflower grows most vigorously in uniformly moist, sunny sites. It will grow in dry, upland sites but there it is less likely to reseed. It will tolerate some light shade but expect it to be taller, more open and less covered in flowers. Divide them every three or four years to keep the dwarf selections growing well.