Every gardener knows the common flowering plant we call geranium.  These common orange and red flowered plants hale from South Africa and were the darlings of European gardeners during the late 18th and early 19th centuries.  Why our native wild geranium (Geranium maculatum) retains official status as a geranium while the garden geranium from Africa is a Pelargonium is a reminder that changes to plant names are nothing new. 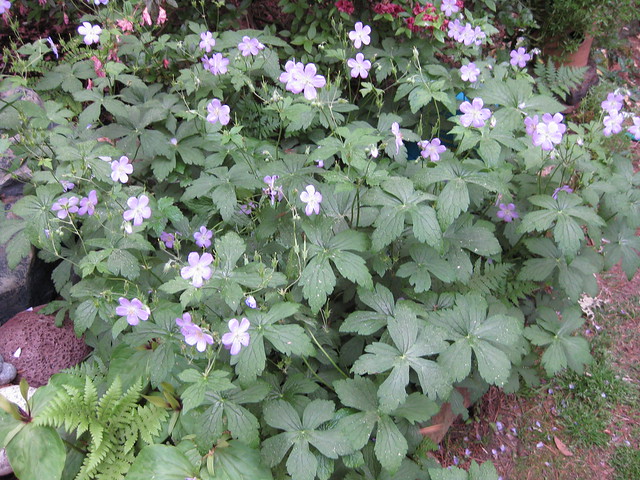 Wild geranium is one of about 450 species of geraniums scattered throughout the temperate regions with the highest concentration of species in the eastern Mediterranean region.  This species is native in woodlands in Canada and the United States east of the Great Plains.

It grows as a clump forming herbaceous perennial reaching 18-24 inches tall with a spread half its height.  The long petioled palmately divided leaves are three inches across with an overall rounded outline but with seven deeply incised, toothed lobes.  Wild geranium foliage persists throughout most of the growing season if moisture is adequate but will disappear in droughty sites as summertime stress takes hold.

The five-petaled, rose-purple-to-pink flowers are to 1.5 inches across and produced in open panicles held above the foliage in late spring and early summer. Though the specific epitaph alludes to the plant having spots on its petals, it is uncommon for them to show. With pollination a distinctive seed capsule forms that resembles the side view of the head of a crane, hence giving rise to the common name “cranesbill” for this group of plants.

When Linnaeus set out to make sense of the classification of plants in the mid 1700’s he lumped a lot of plants together that did not fit comfortably under one umbrella.  The semi-succulent geraniums from South Africa did not fit comfortably with the geraniums from North America so in 1788 Charles Louis L’Heritier (1746 – 1800), a French aristocrat and botanist, reclassified the group.

L’Heritier used the appearance of the flowers as the main way of separating the plant, a very Linnaean thing to do.  The true geraniums, including our native wild geranium, have radial symmetry, meaning that the five petals are essentially alike. The South African geraniums, however, have bilateral symmetry, with a pair of upper petals that are distinctly different than the three lower petals.

But by the time L’Heritier reclassified the plants, there was a bit of a geranium craze going on in Europe.  Multi-volume sets of books were being written on the South African plants, and it took time for the name change to catch up with the enthusiasm for the plants.  So “geranium” became — and remains — the common name for these still-popular plants, even though the Latin name changed about 250 years ago.

Wild geranium is an easy-to-grow plant in any reasonable garden soil.  It does best in sites with dappled shade but will grow in full sun.  Plants have about them an informal, open look so are good additions to the edges of woodlands or the wildflower garden.  If happy they will reseed but are not excessively weedy.