The seasonal progression of blooms in the garden is one of the delights we gardeners look forward to each season. While the yellows of fall flowering members of the daisy family are nice, I prefer a bit of variety. The fall blooming gentians, such as bottle gentian (Gentian andrewsii) provide some variety for the autumnal display. 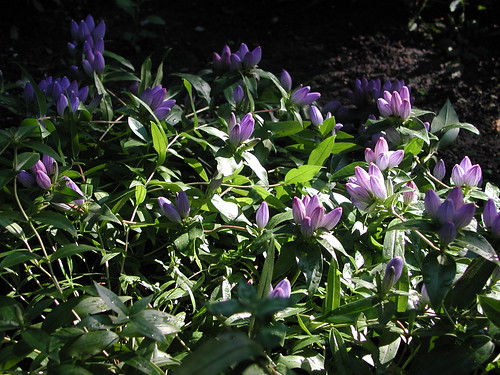 About 400 species of gentians are described from throughout the world with most species residing in mountainous regions or cooler parts of the northern hemisphere. They are classified as belonging to the widely distributed gentian family. Most species are perennial herbs with blue or azure flowers.

Bottle gentian is a long-lived perennial that produces a cluster of 18-inch-long unbranched stems from the taproot. In meadow situations, stems are more upright but without support they flop about with flowers produced on the upturned ends of the stems. The 4-inch-long, 2-inch-wide entire-margined leaves are opposite, glabrous and shiny and lack a petiole. The leaves have three prominent veins running the length of the leaf. At the ends of the branches the leaves are usually whorled.

The blue to violet, bottle-shaped blooms are to an inch and a half long and closed at the tip. They appear in late August through early October in clusters of five or more at the ends of the stems.

The bottle gentian is not reported in Arkansas but is found from Missouri to the Dakotas and east into Canada. G. saponaria, soapwort gentian, is a very similar closed gentian and is found from Arkansas and Texas and throughout the southeastern states. Soapwort gentian produces a soapy froth when the plant sap is mixed with water and has flowers in axillary positions, not just at the end of branches. Though these species occur over a wide range, they are nowhere common and are a real treat to find in the wild.

Bottle gentian and several other closed gentians are pollinated by bumblebees. The flowers have no discernable fragrance but bumblebees apparently know of the nectar reward contained inside and go to the trouble of forcing the flower open to retrieve it.

Gentians are fussy plants in southern gardens because, as a group, they require rich, uniformly moist soil, bright light but cool temperatures. Hard conditions to find in an Arkansas summer. In the spring, I planted the bottle gentian in my full sun rock garden and in a lightly shaded creek-side location. The full sun plant burned pretty extensively and did not bloom this year whereas the partially shaded plant is blooming but the floppy stems give it a decidedly untidy look.