Late spring in my garden involves a unique ritual – a kind of vegetarian version of an Easter egg hunt.  Each evening in mid May, I shuffle among the bushes at the corner of my garage looking for newly emerged shoots from my aggressive Henon bamboo. Miss a day, and a foot tall shoot suitable for the stir fry pan will be four feet tall the next day. It is days like this that make me wish I’d planted a clump-forming bamboo, such as Fargesia nitida. 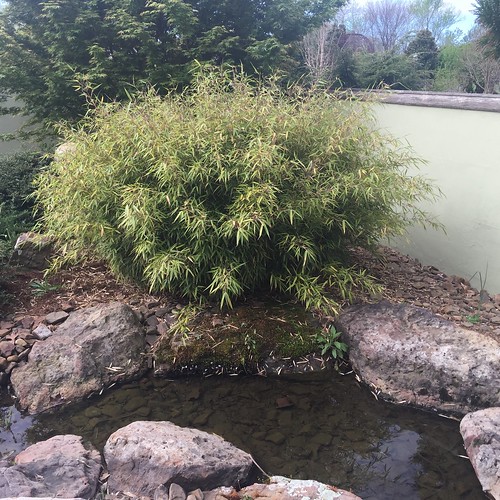 Studying bamboos – a member of the grass family that may only flower once every century – is a difficult challenge. Initially, clumping bamboos were all classified as members of the single genus Fargesia, with 90 species described. The Flora of China uses this approach but acknowledges that with easier travel throughout Asia and the advent of molecular techniques to untangle relationships, the genus is being broken into four species.

Clumping bamboo in north Arkansas is relatively diminutive in size compared to its more robust kin. The 10-year-old plant I have followed grows about six feet tall with the stems (culms) about two feet wide as they emerge from the ground. The plant is mushroom-shaped with the top of the plant splaying out to about the same width as its height. It is reported to grow up to 12 feet tall in moist, partially shaded sites.

The bamboo clump is extremely dense with hundreds of pencil sized culms emerging from a very small piece of real estate. The stems are yellow-green with compound leaves maintained to near the ground. The leaves are evergreen and survived -20ºF temperatures in 2011.

Fargesia is named for Paul G. Farges (1844-1912), a French Catholic missionary and botanist who spent most of his career in southwestern China collecting plants. He collected more than 4,000 species, many of which were new to science, and has a number of plants named in his honor. This genus was first collected in the 1880’s with living plants sent to the St. Petersburg Botanical Garden in Russia.

Bamboos use a reproductive strategy called “semelparity,” meaning they grow for a while without any consideration for reproduction; when they reach some sexual tipping point they reproduce like mad and then die. Salmon, squid, bamboo, century plants, mayflies, cicada and a number of other species use this strategy. Bamboo blooming cycles vary from once every 65-125 years.  From 2002-2007. this clumping bamboo flowered throughout the world with some alarming results.

It turns out that this clumping bamboo, native to the mountainous regions of Sichuan Province in Southwestern China, is one of the principle foods for the bamboo-eating giant pandas. Several of their panda preserves reported flowering and a subsequent crash in panda reproduction during this natural cycle.

Clumping bamboo is an easy-to-grow plant that can be used as a specimen plant, for screening or even massing at the back of a border. It is slow growing with the diameter of the clump only increasing in size by inches each year. It requires only good drainage and any reasonable garden soil. It can be grown in full sun or moderate shade. Plants have good drought tolerance but will be larger with more moist conditions.