Last week we looked at white snakeroot, the plant that caused milk sickness, a disease that may have killed thousands of pioneer settlers as they moved into partially wooded regions during the 19th century. This week, let us consider another Eupatorium, Tall Boneset (E. altissimum), one of the most important herbal remedies to be found in the frontier home. 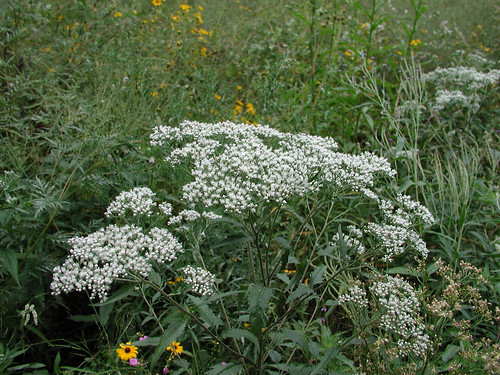 Actually, two closely related species of Eupatorium are called “boneset” because they have similar medicinal properties. In the midwestern part of the country, E. altissimum is more common while in the eastern states E. perfoliatum prevails. Both species are widely distributed from the eastern edge of the Great Plains to the east coast where they are typically found in moist, sometimes partially shaded sites.

Tall boneset is a 3- to 4-foot-tall perennial herb with opposite, short-petioled, lanceolate leaves that are produced on round, unbranched stems. In late summer, as flowers begin forming, the terminal end of the stem branches into a somewhat flat-topped corymb with a number of small, rayless, white heads. Each head is about one half inch across and consists of a series of white disk florets. Plants bloom over about a six-week period from late August through mid-October.

Boneset is so named because an herbal concoction made from the leaves and stems of flowering-age plants relieved the bone aches associated with particularly severe fever symptoms. In the South, dengue fever was called break-bone fever, because the pain associated with active infection was so severe it felt like the bones were broken. It was widely used in the Civil War South and by the enslaved because it was readily available and effective at treating symptoms.

European settlers were first taught the use of this plant from the time of initial contact with our Indian population. Its use as one of the principle herbal remedies continued well into the 20th century in rural areas. It had a bitter taste and was served as a cold or hot tea. Apparently, it was dreaded by children who were forced to take the elixir. Administering the herbal tea caused the patients to sweat, which helped break the fever. Because of this, it was also known as feverwort (wort being German for plant). Thoroughwort, another common name, was used because it supposedly cured such a wide range of ailments, it was thorough in its job.

Another interesting fact about this, and several other Eupatoriums, is that they often reproduce apomictically. Apomictic plants produce seeds without the benefit of fertilization so they are clonal with an identical genetic makeup. These plants are all female. This shift towards an all-female race is not complete; usually about 10% of the plants in a population do produce some pollen so some of the female flowers will be fertilized, allowing for the introduction of new traits into the population. Dandelion is another member of the daisy family with apomictic female seeds.

Boneset is not especially ornamental but is worth growing in educational gardens where plant lore is discussed. Modern medicines have replaced the use of boneset tea, but if drug prices keep going up, maybe herbal remedies will find new uses in the modern world.