I think of myself as a keen observer of nature, but I’m not. I notice the things that interest me and the rest skitter by unnoticed. About 25 years ago, I received a weed from a former student who needed it identified. I didn’t know the plant the and, as sometimes happens, it got buried on my desk and finally slipped my mind. Then in the last decade, I’ve begun seeing the plant everywhere I looked. Thanks to the help of my friend Lissa Morrison, I now have a name for it: American Burnweed, Erechtites hieraciifolius. 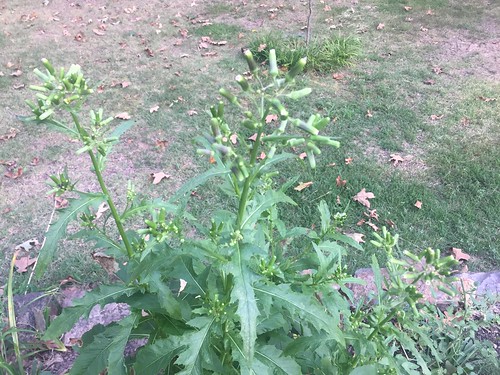 Burnweed (not to be confused with fireweed of the western states) is a native of the eastern states and Canada ranging from Newfoundland to Texas and Manitoba. It has also been introduced as a weed throughout much of the world, especially Asia.

Burnweed is a member of the daisy family where about eight species have been described with a strange distribution: from Australia, across South America and in North America. This kind of distribution pattern makes no sense from a geological or plant geographic standpoint, so I suspect more study is needed to determine if the Australian and North American plants are really in the same genus or just look-alikes.

This plant is a fall flowering herbaceous annual that grows 3-4 feet tall from a stout, unbranched stem. When flowers begin forming in the upper nodes of the alternate leaves in late summer, plants begin producing side branches bearing from three to a dozen green, cigar shaped flowers that look like they want to open into something pretty, but never do.

The simple leaves clasp the stem with no discernable petiole and are 4-6 inches long, with coarse teeth and a ragged outline. Leaves are fleshy and wilt quickly when cut. They are edible but not very palatable, as even deer seem to avoid them.

The green flower head is to an inch long with a cigar shaped form. At the tip of the green sepals a short display of whitish to yellow disk flowers just barely poke out allowing for pollination by wasps. Following fertilization, the base of the flower expands and soon thereafter a tuft of white, dandelion like parachutes appear and float the seeds across the landscape.

As a weed, burnweed is a relatively benign interloper. Because I only began noticing it about a decade ago, I decided it had recently moved into the area. Not so. Checking some of my botanical references, I find it was found in almost every county of Arkansas and Missouri more than 50 years ago. I just never paid any attention to it.

I noticed burnweed a lot this spring in my prairie garden – well really my front lawn, which I now call a prairie since I stopped mowing it two years ago. The wet spring, coupled with an apparently ineffective preemergence herbicide, resulted in a number of foot tall plants arising in short order in late spring. Because they don’t have much of a root system, they were quickly dispatched by pulling.

Burnweed is supposedly a weed that shows up after fires, but in reality, fires are not common in the moist areas where this weed is likely to be found. It really is a weed of disturbed sites, in the woods where there is some open ground or in areas where garden plants are maintained without cultivation. Here, strawberry beds, perennial borders or sunny groundcover plantings, seem to call to it. In flower beds and borders it is often left unpulled because, in its early stages, it looks like it could turn into something interesting.

Control in the flower garden is easy by pulling. This should be accomplished early in its life, before it has the chance to release the thousands of floating seeds that will supplement the seed bank of your soil for years to come.