As a lazy gardener, I gravitate towards easy-to-grow plants. Of course, in order to determine what is easy to grow, I had to kill a lot of plants. One plant I abandoned along the way was the flame violet (Episcia cupreata). In truth, it wasn’t that hard to grow but I had trouble getting it through the winters. I now know why. 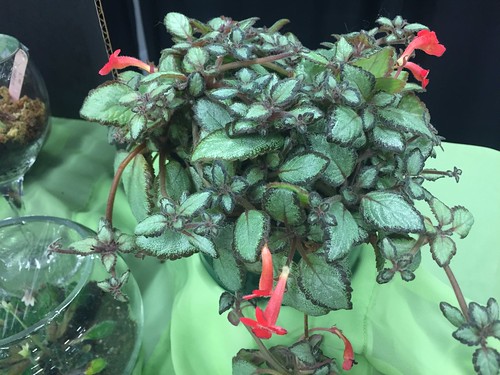 About nine species of flame violets are now recognized in the genus Episcia, which are widely distributed throughout tropical parts of Central and South America. They belong to the African violet family – the Gesneriaceae – and share many cultural requirements with the African violets from Africa.

Episcia grows in a rosette similar to African violet, but from this initial rosette a number of lateral runners develop from the leaf axes just as seen in strawberries. At the end of each of these runners a new rosette forms and it quickly develops into a plantlet.

The showy leaves are fleshy, ovate, often 4 inches or more in length with a stout petiole. The showiness of the foliage is due to a unique form of patterned marking that paint the leaf in shades of silver, gray and copper. The red, orange, yellow or lavender flowers are tubular, five-petaled and to an inch or longer. While beautiful, eagerly anticipated and produced over a long blooming season, the foliage effect is arguably the more beautiful feature of the plant.

Episcias were first discovered in Brazil about 1820 by an Austrian botanist named Charles Frederick Philip von Martinus (1794 – 1868). He was one of two naturalists sent to accompany an Austrian princess who was to become the Empress of Brazil. While exploring the Amazon, Martinus found two new species, including E. reptans, which was described in his publications on the flora of Brazil in 1829. The genus name is an adaptation of a Greek word meaning “shaded.”

But writing it down in Latin and publishing it in Austria and Brazil does not mean your work will be noticed. In 1845, a collector from Kew, W. M Purdie, spotted a plant he liked the looks of in modern day Columbia and asked that seeds be sent to him when they ripened. In 1847 the red-flowered plants bloomed and was identified as a new species, Achimenes cupreata. It quickly made its way into the garden trade in both Europe and England. Twenty years later it was correctly identified and moved to the genus Episcia. Most of the cultivated Episcia are results of hybrids between E. cupreata and E. reptans; purple flowered hybrids have E. lilacina genes added to the mix.

I failed with Episcia because I grew them in the greenhouse and watered them with cold lake water during the winter months. Episcias, both their leaves and roots, are extremely sensitive to chilling injury. Temperatures as low as 60⁰ will stop growth and result in leaf curling and injury. Exposure to only a few hours of temperatures below 50⁰F will kill them outright. What happens is that these chilling temperatures cause the organelles – the mitochondria and chloroplasts – to swell, distort and stop functioning. Additionally, the integrity of the cell membrane is compromised and dead areas develop in the leaves.

Episcia should be grown in a rich, organic potting mix suitable for African violets. They are best when the surface of the soil is allowed to dry slightly between watering, but never allow them to dry out. Always use room temperature water. Ideally the air temperature should be between 70-80⁰F with the relative humidity above 50 percent. Plants should never have direct sunlight but they do need bright conditions to flower well. The same conditions that work for African violets will provide plenty of light for Episcia to bloom. Fertilize as recommended for African violets.

To propagate new plants, select healthy plantlets with four leaves. Pinch off about half an inch of the runner and push this into fresh, moist potting mix. Rooting should happen in about three weeks.