I strolled through the old garden I helped start on the U of A campus in Fayetteville last week, enjoying the opportunity to visit old acquaintances and meet new friends. One of the old friends was a plant called California fuchsia (Epicorium canum, or Zauschneria), a plant I first met over 15 years ago. This tough, supposedly short lived California plant was still doing its thing in a place common sense would tell you it was ill-suited for survival. 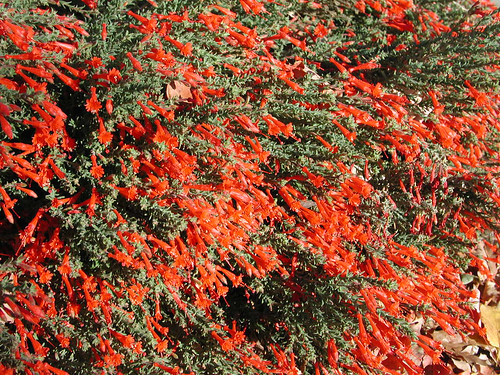 California fuchsia, also called hummingbird flower, is a perennial subshrub native to the Western US deserts from California to New Mexico and north to southern Idaho. It has long been considered a separate genus (Zauschneria), with about 15 species, but recent revisions have moved it in with the willowleaf herbs in the evening primrose family which contains more than 160 species.

Zauschneria is either erect growing with ascending stems to 3 feet tall or with a trailing, low-branched habit of growth. The trailing form is the one I know and it reaches about a foot tall and spreads 2-3 feet wide by rhizomes. The foliage is willow-leaf shaped but small and pubescent gray. In our climate the foliage is often marked with various blemishes as are other members of the evening primrose family, but these foliar leaf spot diseases don’t seem to seriously impact the survival of the species.

The little plant goes pretty much unnoticed until it begins flowering in late September when the hummingbirds are heading south. The one and a half inch long, narrow, trumpet-shaped flowers are produced terminally on one-sided spikes and are specifically designed for pollination by hummingbirds. Flower colors typically are red to red-orange but white, peach and pink forms have been selected. Cultivars selected from wild plants are available as are cultivars derived by hybridizing with closely related species. Over three dozen named cultivars are described. Blooms continue until a hard frost.

Zauschneria is not widely known because its association with California’s Mediterranean climate has left most of us unwilling to try it in wetter, colder climes. The first planting I watched for several years was planted in compacted soil in a triangle between concrete sidewalks. They finally succumbed over one especially wet winter but plants used in better drained sites survived and still thrive.

Zauschneria is probably best considered as a rock garden plant in our region where it should be planted in sunny, well drained sites. It is best in full sun though some clones selected from higher elevations will do best with afternoon shade. The winter hardiness of California Fuchsia is open to discussion. Many sources list it as a zone 8 plant, while others say it is hardy to zone 5.  I feel confident to say that many clones are reliably hardy to zone 7, thus including it in most of Arkansas. Growing clones selected from higher elevations would increase its chance of wintertime survival.

Drainage is key, especially wintertime drainage. Plants are best planted in the spring and then watered until established. After that, additional watering will not be necessary. Cutting back the plants to the ground in mid spring will help control height and keep the plants attractive. Tall growing clones should be pruned back again in late spring to control overall size.