Not knowing the true identity of a plant bugs me. One such plant I retrieved from a friend’s abandoned garden last winter when things were brown and crunchy. It was labeled, but as the plant grew I knew the name was wrong. Fortunately, as soon as it flowered I realized it was a white flowered form of the Chinese mint shrub (Elsholtzia stauntonii “Alba”). 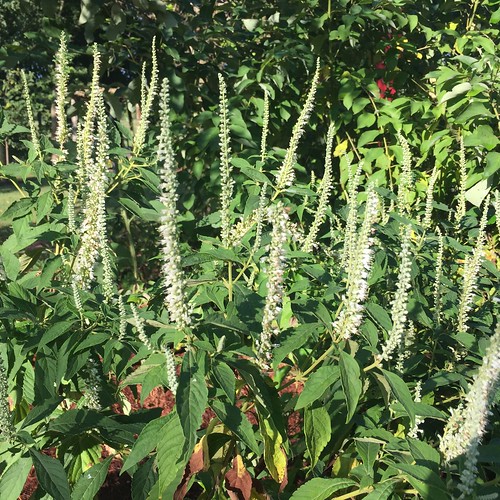 Chinese mint shrub is one of about 40 species of Elsholtzia described, most of which are native to China. This species is native to open grasslands and ravines of north-central China. It is subshrub with woody tendencies towards the base of the plant with herbaceous stems at the top. Plants grow three to four feet tall and wide with long, square stems emerging from a tight crown at the base of the plant. Plants branch freely near the ends of the branches as blooming begins in late summer.

The lanceolate leaves are opposite, mint green, 3-4 inches long and coarsely cut on the margins. Flowers begin appearing in late July and continue to be produced through October. The spiky inflorescences of the white form are 6-8 inches long and held erect like candles.  Each spike is crowded by quarter-inch-long white, fuzzy tubular flowers.

The straight species of mint shrub has lavender flowers with spikes only four to six inches long. It has purple stems while the white form has lighter green stems. Both forms, if exposed to drought stress in mid-summer tend to shed their inner leaves, exposing naked stems with a halo of foliage and flowers near the ends of the branches.

Chinese mint shrub was collected during the 1793 diplomatic Macartney expedition to Beijing (then Peking) sponsored by the King of England. George Staunton (1737 – 1801), appointed as secretary of the expedition, wrote the three volume report on the journey and collected plants. Staunton collected over 400 specimens, including Chinese mint shrub, which he seems to have collected in a garden in Peking. I have found no information on when the white flowered form entered the trade.

The dried specimens from the expedition were given to Joseph Banks of Kew Garden fame. The species was officially named in his honor in 1830. The genus name was established in 1790 and honors Johann S. Elsholtz (1623 – 1688), a Prussian doctor who wrote an illustrated, long-popular book in German on building gardens.

The white Chinese mint shrub is a nice addition to the perennial border where late season blooming is desirable. I find the lavender flowered form less appealing because the spikes are not as erect and the plant tends to look ratty by the time it blooms. Both should be grown in full sun in about any reasonable garden soil. Probably the best way to manage the size of these plants is to cut them to the ground each winter, treating them as herbaceous perennials.

They have good drought tolerance and are long lived in the garden.  Plants are winter hardy from zones 4-8. Neither of these plants are common in the nursery trade but are available from internet sources.