My mid-spring trip to Harrison’s Baker Prairie rewarded me with an unexpected richness of blooms. The minders of the 71 acre tallgrass prairie remnant burned the site late in the winter, resulting in an especially good display of early season wildflowers. When I visited in mid-April, one of the showiest was shooting star (Dodecatheon meadia), a plant that is easy to grow in the woodland garden. 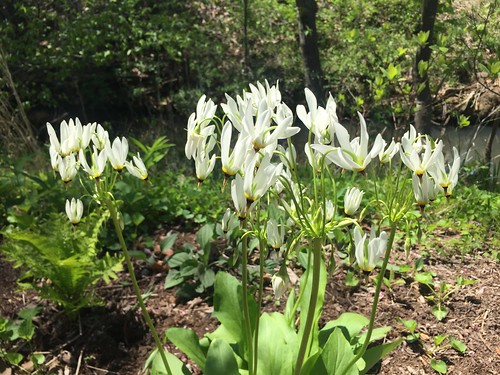 Seventeen species of shooting stars — save one that jumped the Bering Straight to establish itself in Siberia — are all native to North America and classified as members of the primrose family. All are herbaceous perennials, with leaves produced in rosettes at the ground level and flowers held on multiple-flowered peduncles well above the foliage in mid to late spring. While two species are found in Arkansas, only D. meadia is commonly seen. This species ranges throughout the eastern deciduous forest and the tallgrass prairie region as far north as southern Canada and south to the Gulf Coastal plain. I have mostly found them in rich, spring-moist sites in calcareous soils but they can be grown in more acidic conditions.

Our common shooting star grows about 16 inches tall with a leafless scape extending from a lush rosette of bright green oblong leaves. Each flowering scape produces 8-20 1-inch-long shuttlecock shaped white flowers on inch long peduncles. When viewed from the side, the five backwards swept petals take on the shape of a comet in the night sky. The white flowered form is all I have seen in Arkansas, but in other parts of its native range flowers may be pinkish or purplish in color.

Botanists have long recognized that shooting stars are closely related to primroses, a genus of almost 500 species that occurs mainly in Europe and Asia. DNA analysis indicates that the shooting stars cannot logically be separated from the Old-World primroses, but the flowers of shooting stars are so strikingly different than the funnel shaped primrose blooms, the Flora of North America has chosen to retain the old name instead of reclassifying them as Primula. That seems like a good decision to me.

Evolutionary biologists believe a now extinct ancestral form of primrose growing here in North America lost a specific moth-like pollinator. To survive the ancestral shooting stars were forced to adopt a new pollination strategy called “buzz-pollination”, similar to that used by the nightshade family. In this case bees saved the day, maintaining a system of forced cross-pollination which gathered pollen from the pointed end of the flower.

Shooting stars have the same cultural requirements as primroses; namely, they want a highly organic, uniformly moist soil and relatively cool temperatures. Though shooting stars will grow in full sun they only do so when the soil is kept moist during the spring and early summer. They are best grown in warm climates in bright conditions in the shaded woodland garden. They can be grown from seed but getting plants through the seedling phase requires close attention to cultural needs. They are offered in the nursery trade through specialist growers. Once established, shooting star is a long-lived perennial. One clump has grown in one of my azalea beds for about 20 years.