Driving down the street here in Fayetteville last fall, I spotted what I thought to be a 10-foot-tall orange tree, heavy-laden with fruit. Having to investigate, I turned around and discovered my mistake. It was an Oriental persimmon, Diospyros kaki ‘Fuyu’, loaded with a heavy crop of orange, tennis ball sized fruit. 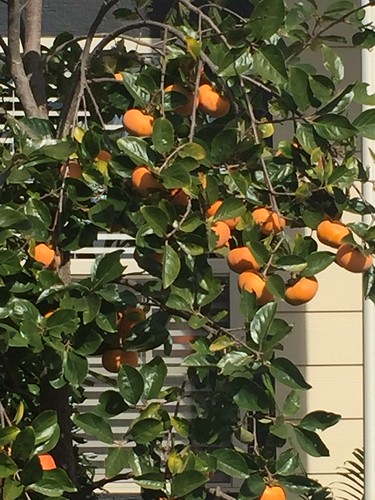 Arkansans are no strangers to persimmons, but kaki, (the Japanese name for the fruit) is something else. There are around 500 species of Diospyros described throughout the world, though only two are native to North America. Two additional species are native in Hawaii. The dense black wood known as ebony is D. ebenum, a native of Ceylon.

Our native persimmon and the Oriental persimmon are the two outliers of the Diospyros, for most are tropical or subtropical trees and shrubs. “Fuyu” is a Japanese clone and is described as mop-headed (mounded) trees seldom over 20 feet tall. Some Chinese clones such as “Great Wall” are erect growing and may be taller.

Kaki leaves are lanceolate, glossy green and four to five inches long with a short petiole and an entire margin. The leaves are blemish free during the growing season and turn yellow to orange in the fall.  The leafspot disease that often renders our native persimmon unsightly by fall, does not afflict its Asian cousin.

Oriental persimmon flowers appear after the leaves emerge in the spring and mostly go unnoticed. Plants are dioecious with male or female trees, though some clones will produce both male and female flowers on the same plant. Female flowers are slightly fragrant, borne singly with four whitish to pinkish petals that are about half an inch long. “Fuyu” is parthenocarpic and sets fruit without need for pollination.

Oriental persimmon fruit vary considerably according to the selection, though yellow-orange, tomato shaped fruit to three inches across are representative. “Fuyu,” a popular Japanese clone with non-astringent flesh, is seedless and can be eaten in its firm state like an apple or allowed to ripen to soft, mushy texture.

Kaki is native through much of the temperate regions of Eastern China and Japan where it has long been cultivated. In China, persimmon seeds have been found in tombs dating back to 187 BC and it was mentioned during the Tang Dynasty (618 – 906 AD) for its seven virtues. Its popularity in Chinese art and literature seemed at its peak during the Ming Dynasty (1368 – 1644).

The species was first noted by Thunberg in Japan in 1776, but seeds were not introduced into the United States until 1854 when Commodore Perry sailed into Japan. A few grafted plants arrived in 1864 with 5000 plants of ten clones imported in 1877. By trial and error, it was learned these plants did best in Georgia and other southern states and California. Frank Meyer (1875 – 1918), the USDA plant explorer, introduced a number of kaki clones from China into the country and helped firmly establish the Oriental persimmon in this country.

In my graduate school days in Maryland, one of my professors was bonkers about Oriental persimmons. Every fall he would have the gang of students over for persimmon ice cream, persimmon bread, persimmon cobbler and even persimmon punch. His enthusiasm for persimmons is typical of those who believe in the fruit, but the general public still has not completely embraced the fruit as a staple in autumnal gastronomy.

The Japanese persimmon is hardy throughout Arkansas though it is more reliable as a fruit tree in the southern half of the state. It should be given full sun and a rich, moist site. It can be used in mixed borders, as a small specimen in the vegetable garden or even grown in a large container.