Large patio containers stuffed with flowering plants have become commonplace in our gardens.  Mixed planters often have non-flowering “spikes” in the mix to serve as a foil for the flowery mass.  Traditionally this is a species of dracaena, but other contenders are out there.  Umbrella plant (Cyperus alternifolius), a sedge native to Madagascar, has been long cultivated but has been rediscovered as a potential addition to patio planters. 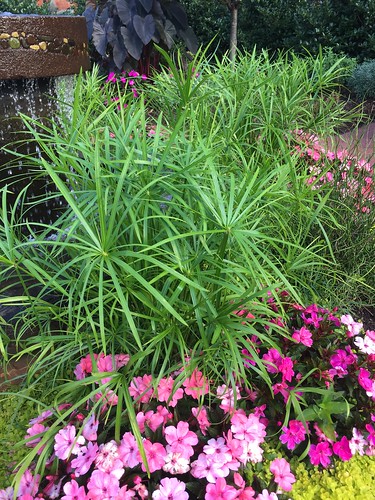 Cyperus is a large group of grass-like plants with worldwide distribution.  Mostly, sedges grow in boggy sites where there is moist soil or even free-standing water.  Over 600 species are described worldwide with more than 30 species found in Arkansas.  Yellow nut sedge, the pesky lawn weed, is familiar to most Arkansans.

Umbrella plant is called a dwarf umbrella plant because it is shorter than the 12 to 15 foot tall C. papyrus, the sedge used by the Egyptians to create their paper scrolls.  It can reach four to six feet tall, but dwarf selections such as ‘Wild Spike’ are usually on the shorter end of the range.

Plants have a compact set of slowly spreading rhizomes, so the stems arise from a small area.  The triangular stems are devoid of leaves, except at the end when ten inch long, flattened leaf-like bracts splay out like spokes of an umbrella.  The twenty or so spoke of leafy bracts spread out, giving the plant a two to three foot spread.

‘Wild Spike’ is grown from seed so flowering will be delayed until late in the fall.  However, if the plant is saved over for a second season, the straw colored flowers will be produced during the growing season.  In parts of Asia this species has naturalized in wet locations but does not seem to have escaped cultivation in North America.

Umbrella plant has been cultivated since Victorian times, probably reaching its peak during the water garden craze of the 1920’s.  Since then it has been around, but not especially common.  Now that it has entered the mass market as seed grown plugs, it should enjoy a blip in popularity until being replaced by the next new thing.

Plant foliage will be killed with the first frost and the crown will be killed when temperatures drop below 20˚F.  Umbrella plant can be grown as a houseplant over winter by keeping it in a bright situation away from drying heating vents.

Umbrella plant can be grown in the ground or in containers.  Container plants will be shorter, reaching two feet or so in height with a wide crown.  If planted in ground beds, they will grow larger provided there is sufficient moisture.  They will grow in full sun or medium shade.

Plants can be propagated by seeds, division or a tip cutting.  Though slow, tip cuttings mimic what happens in nature when the branches arch over into standing water.  Trim the leaf-like bracts in half so they will fit into a glass jar, then invert the stem in water and wait.  Eventually a new shoot will emerge and a new plant will have started.