Halloween is becoming one of our biggest holidays. While the Jack-O-lantern may be the fastigial symbol of the fall festival, the real money to be made from the holiday comes from Spidey Man and princess costumes, sale of candy for trick-or-treaters, and now Halloween inflatables and twinkling lights. Go figure. 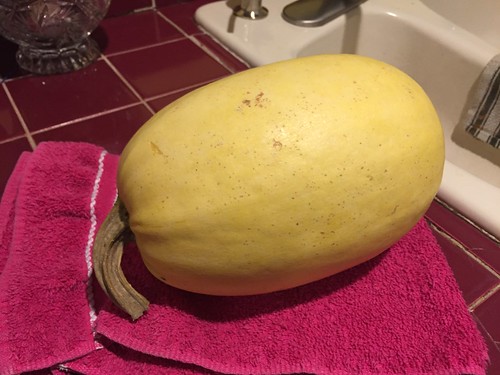 Pumpkins and their kin are New World plants that have been cultivated in the Americas for at least 7,000 years. They are a promiscuous lot and interbreed shamelessly, creating a bewildering menagerie of sizes, shapes and forms that range from the succulent yellow squash, through the traditional pumpkin to the bizarre turban gourds.

Along this spectrum of botanical malleability lies the spaghetti squash, a selection of the common pumpkin (Cucurbita pepo var. pepo) which is itself a catch-all assemblage of hybrids.

Like all cucurbits, spaghetti squash is a large, fast-growing annual with stout stems and large, three-lobed leaves. Unlike pumpkin vines which we think as sprawling plants, spaghetti squash can both sprawl and climb trellises and fences, attaching itself by tendrils. “Tivoli” is a Sakata Seed Company spaghetti squash with a bush type habit of growth that won an All-American Vegetable award in 1991.

The spaghetti squash fruit is a smooth, creamy-yellow, oblong affair to ten inches long and often weighing around 5 pounds. The rind is hard and inedible, making it fit in with the winter squashes. When cooked, the inner pulp separates into long, spaghetti shaped segments that have the appearance of our favorite pasta but without the carbs.

The cucurbits left their New World home in the middle of the 16th century and were dispersed around the world. In 1936, the spaghetti squash had a homecoming in the pages of the Burpee Seed Company catalog. Its return to our shores is a story intricately detailed in an April 2007 blog post by the Polyglot Vegetarian.

According to the best guesses of its origin story, the source material for vegetable spaghetti came from Manchurian (China) farmers who had developed the plant as a fodder crop around 1850. In 1934, the Sakata Seed Company in Japan acquired some seed and offered wholesale lots to seed retailers around the world. Burpee added vegetable spaghetti in 1936 and it had some popularity during the Victory Garden days of World War II, but it never really caught on.

In 1960, Sakata reintroduced the seed line to the market. In 1964 the English seed company Thompson and Morgan, which had a fairly wide American distribution of catalogs, featured the plant prominently. The counter-culture movement was in full swing across the nation and the hippies in California started growing the plant as a healthier alternative than traditional spaghetti. By the early 1970’s the Green Revolution and the back-to-the-land movement exploded across America. Frieda’s Finest began promoting the crop and making it available to groceries in 1975. By 1980 it had become mainstream.

Easy to grow, prone to attack

Spaghetti squash is considered easy to grow, but like all cucurbits, is prone to attack by squash bugs and powdery mildew. Plants should be planted on 6-foot centers. If conditions are to its liking, a few hills will produce plenty of fruit. It should have a rich garden soil and at least six hours of direct sunlight a day. Seed planting should be delayed until the soil has warmed completely with plantings as late as early July possible. If the plant is allowed to climb, the heavy fruit should be netted to prevent their weight from destroying the vine.