Tough, showy plants always appeal to me. I’m drawn to them because their attractiveness is not some timid thing, but an ability to flaunt their beauty in a hard, sometimes harsh world. The earth stars – little bromeliads in the genus Cryptanthus – are just such plants that combine beauty and toughness. 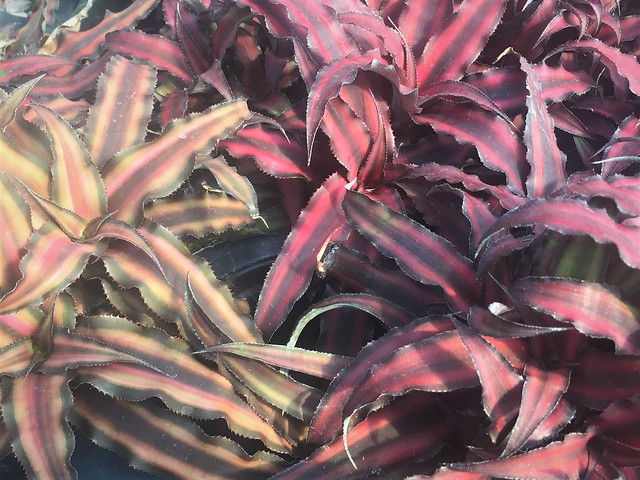 About 40 species of Cryptanthus have been described with all hailing from the mountains and lowlands of southeastern Brazil. These bromeliads are different than most of their kind in that they grow in the soil, not as epiphytes attached to trees. They also differ in the fact that their flowers do not extend from the whorl of leaves on a long stalk like most bromeliads, but instead nest in the central whorl of leaves. In fact, the Latin name translates as “hidden flowers.”

About 10 of the described species are offered by specialist bromeliad growers, but mostly it is the colorful-leafed hybrids we see offered in garden centers. The common name “earth star” is fitting because they grow as a more or less flat rosette of leaves ranging from 4-10 inches across. They do not form a water-filled vase as found in many epiphytic bromeliads. The leaves are to three-fourths of an inch wide, festooned with tiny, stiff-prickly bristles along the edge of the leaf. The leaves may be pink, red, brown, gray, white and all manner of combinations of these colors. Markings on the leaves may be zonal banding running across the leaf or linear stripes running the length of the leaf.

Flowers appear sporadically in the whorl of the leaves and are small, three-petaled and often inconspicuous in shades of white or pink. When plants flower, the central whorl slowly dies away but is replaced by a series of smaller offsets (pups) that can be easily removed and replanted.

The species was first described in 1831 but received scant horticultural attention for more than 150 years. Species were available for the diehard bromeliad collector but mostly Cryptanthus remained in the realm of the serious collector until the 1970’s when the houseplant craze struck the world. Starting in the 1970s and 80s, Ed Hummel in California and Grace Goode in Australia started crossing the various colorful-leafed species to create showy hybrids. These little plants were showy, shipped easily, and held up well under the mass marketing care they received in the stores.

These early hybrids caught the attention of bromeliad enthusiasts and soon Cryptanthus breeding became the rage amongst would-be bromeliad breeders. Today as many as a thousand hybrid Cryptanthus have been registered and even a Cryptanthus Society formed to promote these small bromeliads. Their diminutive size makes them ideal for breeders who can carry out their crosses in a small space.

Cryptanthus are well suited for use in shallow bowl planters on the patio, as an addition to a mixed planter or for even bedding out in a raised bed where they can be used as colorful annual accents. They can be grown in any well drained potting soil where they are watered and fertilized at a moderate rate. They are not a true succulent, so keeping them too dry will diminish performance, but keeping them too wet can cause plants to succumb. They should be given bright shade or, if grown in full sun, place them where they get protection from the hot afternoon sun. Too much shade will cause the colorful leaves to turn green. They make easy-to-care-for houseplants during the winter months but will perform best in the long term if moved out of doors during the summer.