For more than 50 years, there has been a botanical cold case marking time on the edge of the Grand Prairie of eastern Arkansas. The question: what is this unusual white flowered shrub? Finally, and hopefully definitively, the question has been answered. Stern’s Medlar is a hybrid species between a hawthorn and the Old World Medlar and is correctly known as xCrataemespilus canescens. 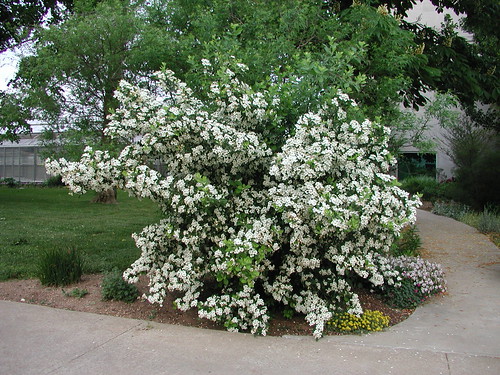 Our story begins in the summer of 1968, when Pine Bluff birder Jane Stern found her way to an area near Hazen, Arkansas, now known as the Konecny Grove Natural Area looking for a rare Traill’s flycatcher. The following summer U of A ornithologist Doug James contacted Stern and asked her help staking out the thicket of hawthorn-like bushes where the flycatchers nested and report back when they arrived at the site.

In June of 1969, after the flycatchers had fledged, Stern realized that the bushes where the birds nested were quite different from the other hawthorns of the area so she collected samples and sent them to U of A botanist Ed Smith for identification. The deciduous, multistemmed shrubs were about 15 feet tall and spreading outward by a series of root suckers. Only about a dozen plants were found. Unlike most hawthorn with predominantly lobed leaves, the mystery plant had simple, almost entire leaves.

In late spring (around mid-May in Fayetteville) the shrub produces a good display of open-throated, five-petaled flowers to an inch and one half across that are peppered with 25 or so prominently displayed stamens. In late summer plants produce a reddish, sweet tasting berry.

Though he wasn’t completely comfortable with his identification, Smith concluded the plant to be a dotted hawthorn, Crataegus punctata. A decade later, in preparation for the release of the Vascular Flora of Southeastern United States, taxonomists rejected Smith’s identification. In 1988, James Phipps, a taxonomist with the University of Western Ontario and hawthorn expert, learned of Stern’s discovery and began his own investigation. In 1990 he proposed calling the plant Stern’s Medlar (Mespilus canescens) — a new species with the only other Medlar know from eastern Europe.

This held until 2007, when Eugenia Lo and her colleagues from the University of Toronto, began looking at genetic markers of a number of members of this section of the rose family, including the hawthorns, medlar, serviceberry and chokecherry. From this work they concluded that Stern’s medlar was a hybrid between two different genera. The female parent was the blue fruited Crataegus brachyacantha, which grows in that area, and the European medlar, Mespilus germanica. She gave Stern’s medlar its latest, and hopefully final name: xCrataemespilus canescens. The “x” before the name indicates it is a hybrid between two genera, a rare event in nature that usually results in sterility as in mules and Stern’s medlar.

It turns out that Slovak, an early 20th century settlement only two miles from the place where Stern’s medlar was found, was home to over 50 eastern European immigrants by 1909. Medlar is grown in gardens so it is not unlikely that one of these families planted a tree to remind them of home. The bees did the rest.

Stern’s medlar is not really in the nursery trade though it does have an attractive springtime display of white flowers. The UofA plant shown in the accompanying photo was a pass-along plant propagated from root suckers from when attempts were being made to determine its true identity. It grows in full sun and has prospered in the fertile soil of our test garden.