Spring speaks to us in colors, with our native flowering dogwood (Cornus florida) perhaps shouting the loudest. Dogwood is a quintessential American tree, appreciated the world over even though many other parts of the world can’t grow it very successfully. 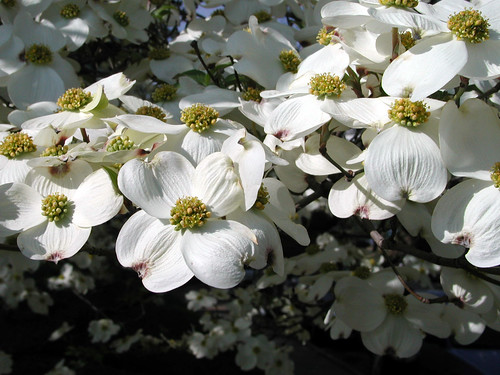 The first flowering dogwoods made it to England in 1722, but the mild climate was not to their liking — the first tree didn’t flower there until 40 years later. In 2012 the United States government sent Japan a shipment of 300 dogwoods to replace those we sent as thanks for the flowering cherries they sent us a century earlier. Those trees now grace the Tidal Basin in Washington, DC. Of the hundred dogwoods we sent Japan in 1915, only one still lives.

There are between 35 and 65 species of dogwoods in the northern hemisphere, depending on which botanist you believe. Of the showy, large bracted species there are six species; three in North America and three in Asia. All of these – save Cornus canadensis – are closely enough related that they have been crossed to create hybrid forms.

Our native flowering dogwood is distributed throughout the region of the eastern deciduous forest from southern Canada to central Florida and as far west as central Oklahoma. It usually occurs as an understory or edge-of-the-woods tree where it grows 20-30 feet tall with a width sometimes twice its height.

The delight of dogwood blooms is that they appear before the plants produce leaves for the coming growing season. These showy white blossoms can be as much as 4 inches across with four broad, petal like bracts that are rumpled on the ends and often tinged with shades of brown or maroon. Pink-bracted versions appear sporadically in the wild and are readily available in the nursery trade.

The true flowers are the 20 or so small, 4-petaled blossoms in the center of the field of white. If pollinated, these will form into a tight cluster of a dozen or so peanut sized red berries come fall. Fall color is often spectacular, ranging from bright red to deep burgundy.

Today we think of dogwoods as ornamentals to be planted in our yards and gardens, but at one time they were an important forest tree. In his 1954 book, A Natural History of Trees, Donald Peattie tells the reader that all the suitable dogwoods for the timber trade are gone – save those in Arkansas – and when they are gone, there will be no more.

The story of dogwood’s use in the timber trade is an interesting one. With the industrial revolution came mechanical looms that mirrored the older, labor-intensive hand weaving process. These machines needed a shuttle cock to pull the yarn back and forth across the weave at high speed. Traditionally these shuttle cocks had been made from the hard, strong wood of Turkish boxwood, but that all changed after the Civil War when a new fad – roller skating – swept the world.

In 1863 the first steerable quad-wheeled roller skate was invented in New York City with the first roller rink to follow three years later. Suddenly, the real money was in making roller skate wheels, not shuttle cocks, and weavers had to find a new source of wood. Dogwood wood fit the bill nicely because it is dense, impact resistant and polishes smooth with use, all characteristics ideal for weaving. Ninety percent of the dogwood lumber went to produce shuttle cocks.

Dogwoods never got the memo that native plants are easy to grow. I suspect more than half of the dogwoods planted each year die within a few years of planting. They are a very site specific species, requiring relatively moist, well drained, fertile soil with an acidic pH. While they may be easier to grow in a shaded understory, establishing a young transplant where it has to compete with established trees for summertime water can be challenging. Probably the best site is a location that gets sun through midafternoon and then late-day shade. Dogwoods – even relatively young ones – should be moved as balled and burlapped or container grown trees.

Mike Dirr, in his Manual of Woody Landscape Plants, usually devotes a paragraph or two to the ailments of the plants he describes. Not so with dogwoods. He devotes nearly two pages to the insects and diseases afflicting dogwoods. They are many and can be fatal. Site selection, proper mulching and water management are the starting point for avoiding problems. Because the rewards are so great when conditions are right, it makes sense to plant dogwoods in the home landscape. But don’t go in thinking it will be a piece of cake just because they are a native tree.