Plant of the Week: Corms are not Bulbs

One of my first garden interests was to learn about bulbs. It didn’t take long to realize that a lot of the plants sold as “bulbs” weren’t bulbs at all, but some other type of dried storage body. Technically, they are called geophytes and include bulbs, corms, tubers, fleshy roots and rhizomes. Let us consider corms. 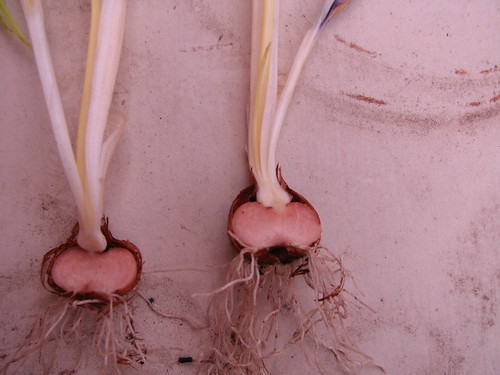 Geophytes are underground storage organs that permit a herbaceous perennial plant to endure periods of extreme drought or cold by going dormant and disappearing below ground. This type of adaptation is found worldwide in a number of different plant families. It is more common in the northern and southern temperate zones than the tropics because in tropical zones, all that moisture can lead to rotting.

Corms are found in a number of plant families and are especially common in the Iris, Asparagus and philodendron families. Interestingly, the lily and amaryllis families does not produce corms, instead relying on true bulb formation to survive between seasons. In the philodendron family, corm formation is found in areas that have a strong wet-dry cycle and includes plants such as taro, jack-in-the-pulpit, and Xanthosoma.

True bulbs and corms are both examples of modified stems, but the tissue used to store food reserves – mostly starches – is different. In true bulbs, the food reserves are stored in the bases of old leaves that surround a dwarf stem at the base of the bulb. In corms, food reserves are stored directly in a shortened vertical stem. If the protective covering (the tunic) of a corm is removed, it is possible to see concentric rings running around the circumference of the corm. These lines represent nodes and sometimes buds will be seen pushing out of these joints.

The internal structure is a foolproof way of telling a bulb from a corm. Cut it in half and, if you have layer upon layer of concentric rings, it’s a bulb. But if the tissue is uniformly solid, then it is a corm.

Corms reproduce in two distinct ways. In some species the corm gets larger and larger each season. For example, the softball size taro corms sometimes seen are the product of several years of growth. Annual replacement of the corm, the other type of reproduction, is more common in the flowering corms such as crocus, gladiolus or Dutch iris.

When the corm is planted, the buds near the top of the corm begin growing. In crocus, for example, two or three buds may emerge in late winter when the dormancy requirements have been met. In gladiolus, one or two buds may be produced. As the plants begin flowering, a new corm will form atop the old corm at the base of the flowering stem. As the upper portion of the plant continues growing, the old corm shrivels and the new replacement corm enlarges. If the soil is rich and conditions good, the size of the replacement corm will be the same size, or even larger, than the corm planted. But, if the environment is off, the food reserves in the original corm will have to be divided between two or more stems and their developing corm, and they will be smaller than the one planted.

Many corms form miniature structures called cormels or cormlets at the base of the old corm. These miniature corms are often about the size of a pencil eraser and are too small to flower. Their production is an insurance policy for the plant because corms are nutritious snacks for below ground creatures such as moles and pocket gophers. Even if the corms are eaten, usually some of the cormels escape and will flower in another couple seasons.

Corms produce two kinds of roots. The fibrous roots from the old corm anchor the plant and provide for water and nutrient uptake. Stout roots formed at the base of the new corm are called contractile roots. These thickened, sometimes corrugated, roots contract when the soil dries out and pull the corm deeper into the soil, thus adjusting the depth of the corm to the proper level for survival.