Oh, if the truth were only in shades of black and white. The popular wisdom of the day according to many gardeners is: natives good, nonnatives bad. But this oversimplification denies the fact that all the plants we use in our gardens have good and bad qualities. Carolina snailseed (Cocculus carolinus), is a beautiful native plant but it can be a tad aggressive. 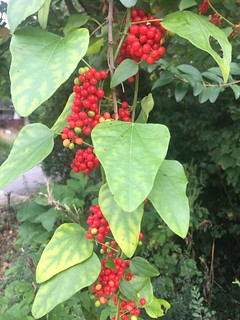 Cocculus is a genus of about 10 species found in the southeastern United States, as well as in China and adjacent areas of Asia and Africa. Imaginatively, this species’ Latin name translates as “a berry from Carolina.” It belongs to the moonseed family, a large tropical family of vining plants found throughout the world. A few of these have migrated into the northern temperate zone here in Arkansas, including three related climbers that are each in their own genus.

Carolina moonseed is probably found in every Arkansas county. The other two species have purple-black fruit that resemble small grapes. Calycocarpum lyonii (cupseed) is found in upland parts of the state while Menispermum canadense (Canadian Moonseed) is found only in the Ozark highlands.

Carolina snailseed is a fast-growing woody vine capable of climbing 15 feet or more in height where it scampers over shrubs or twines as it climbs a trellis. In mild climes along the Gulf Coast it is evergreen, but in Arkansas it is mostly deciduous. The alternate, three-inch-long leaf blades are thick textured, smooth margined and variable in shape with some being more heart shaped while others are three lobed.

Individual plants are either male or female with insignificant cream-colored blooms produced on panicles on current season growth. Female plants produce shiny, pea sized red berries in dense clusters down the stem in September and October. The berries are juicy but foul tasting and loaded with alkaloids. Birds eventually eat them but cold temperatures and time may make them more palatable. A number of tropical relatives in this family are the source for the poison curare used on blow gun darts by aboriginal South and Central American hunters.

An easy way to identify the moonseed family is to look at the seeds. They are coin shaped with a corrugated thickening on the flat surface of the seed. In Carolina snailseed the corrugation almost completes the circle, giving the seed a close resemblance to the shell of a snail. In others, such as Canadian moonseed, the corrugation is only part way around and gives the appearance of a crescent moon.

Though native, I can’t recall seeing Carolina snailseed in the wild. I do find it scattered here and there in older parts of town where some long-ago gardener probably planted it near a fence or trellis and it had its way with the space for a time. Left alone in these mostly abandoned spaces, Carolina moonseed often reaches an unruly truce with its neighbors and fades into the background as a part of the out of bounds shrub border. It is always interesting to have a showy vine around the garden, but I personally would not plant this one. If the birds brought one in, I would probably let it grow but would keep a close eye on it.